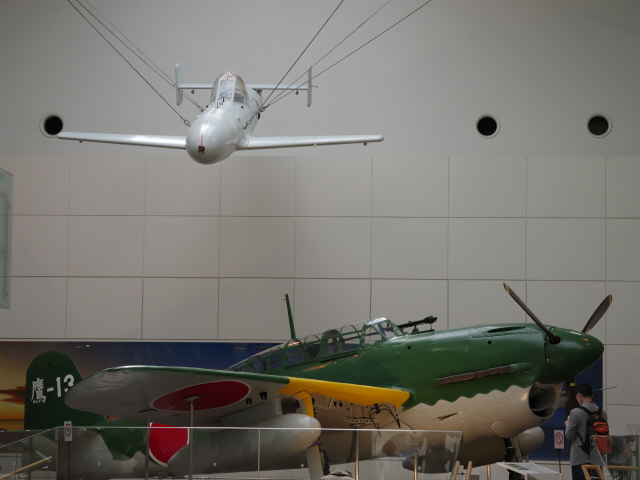 What there is to see: The shrine area is in part a place of worship, in part a kind of "amusement park". As you enter the site from the main gate, passing under an oversized steel torii gate, the path is lined with fast-food stalls and beer gardens, and you see people happily having a beer or enjoying a snack. As you get closer to the central shrine itself, the atmosphere becomes more sombre. You usually see groups of people doing the typical traditional spiel of bowing, clapping and tossing coins at the shrine.
Turning right at the shrine and past another couple of buildings you get to the unmissable glass facade of the museum, behind which you can already see one of its large exhibits, a "Zero" fighter plane in war-time colours. Also in the foyer hall is a locomotive from the Death Railway in Thailand!
Past the ticket machines, there's a pre-given, signposted circuit through the main exhibition (starting upstairs) – though you can deviate from it and skip bits in the side wings.
The first few rooms hold little of interest to the dark tourist: lots of older military regalia, photos of war heroes of old, charts of battles, artefacts like guns, helmets, and so on. It's only when you get to the central WWII parts that things get somewhat more interesting – and more controversial.
Look out for the slanted descriptions of e.g. the developments leading up to Japan's involvement in WWII – they make it look like they were the ones who had wanted to preserve peace and were just forced into war in order to gain access to raw materials … namely in China, Indonesia, Korea, Indochina etc. That is: allegedly it was basically the USA's fault, because they denied Japan access to those resources, so that Japan "had to" go on such a conquering spree … or something like that. Anyway, how exactly Pearl Harbor links up with this kind of argument is not made clear. But the historic military success of the operation is, as you would expect, lavishly illustrated.
You won't find Japanese war crimes such as the Nanjing massacre given much of a mention here, of course. The Japanese nationalist interpretation is, unsurprisingly, that it a) had a much lower death toll than is normally accepted, b) that the Japanese army is not to blame for anything, c) that they came as liberators … i.e. the usual denial strategies.
What the museum is quite frank about, though, is the issue of Kamikaze operations. Here, they are of course portrayed as particularly heroic. How the young pilots and submariners were made to sacrifice their lives is not a point elaborated on here.
The most poignant exhibit is the "Ohka" ('cherry blossom') manned flying bomb. This was different from other planes used for Kamikaze attacks. Normally they were regular fighter planes that the pilots instead steered into some target. But the Ohka was specifically designed for the purpose, and nothing else! It was basically a manned missile, dropped like a regular bomb/missile from heavy bombers, then the "pilot" would ignite the Ohka's rocket boosters and steer the device into a target. It couldn't even go down in any other way lacking any sort of landing gear. This particularly stark element of inescapable deadliness makes it the darkest exhibit here.
There are also a couple of "Kaiten" Kamikaze submarines on display which were similarly special designs, thus the marine equivalent of the "Ohka". The inclusion of these bits of dedicated Kamikaze equipment, not just the regular "Zero" fighters, also makes the Yushukan different from the other Kamikaze museums in Japan, especially Chiran. The heroism element pervading the Yushukan can be a bit off-putting. At Chiran, the main Kamikaze-related memorial space, it's all somewhat less nationalist/revisionist in its approach and a bit more dignified (though still rather glorifying).
Signage and descriptive texts in the Yushukan museum are usually in Japanese and English; though some exhibits are Japanese only. The same applied to a special exhibition tagged on to the main museum at the time of my visit in April 2009. At the entrance, foreigners are handed a free brochure in English which describes the general layout of the museum but doesn't help much beyond that.
In the foyer is also a museum shop. This offers all manner of tack and militaria souvenirs, but informational material is available only in Japanese.
[Update: I included a revisit to the Yushukan in my 2019 return trip to Japan, and can report that nothing much has changed here, except a slight increase of the admission fee and the fact that photography is now also allowed in the central main exhibition hall of the old building, not just the foyer in the modern annexe. Hence I've been able to expand the photo gallery below; but the bulk of the text I think can still stand as it is, unchanged.]
Location: north-west of central Tokyo, just north of the Budokan and the Imperial Palace area, in the district of Chiyoda.
Google Maps locator: [35.6951,139.7436]
Access & costs: fairly easy to reach; shrine area free, museum a little overpriced.
Details: It's just about walkable from central Tokyo, and mostly along a pleasant route for a city, namely first via Imperial Gardens east park and then onwards north, through Kitanomaru Park and past the Budokan. Then turn left and cross the road, to get to the eastern entrance to the Yasukuni park/shrine complex.