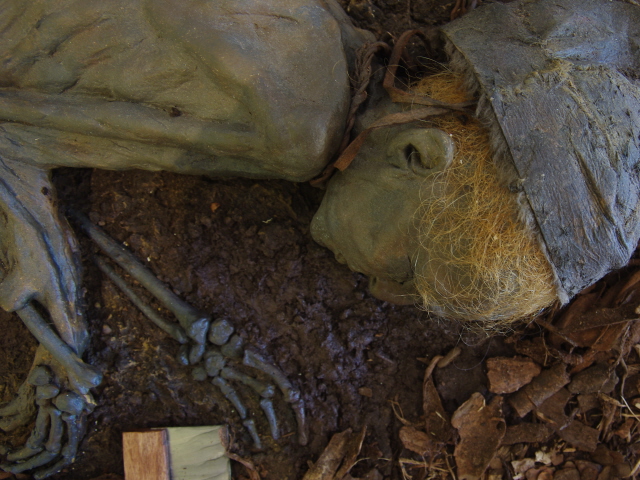 The most famous and best preserved bog body: the corpse of a man found in a peat bog near Tollund, a village near the town of Silkeborg, Denmark, where the Tollund Man is now on display.

More background info: The Tollund Man was discovered in 1950, near the site where other bog bodies had been found. His body was so well preserved that at first it was suspected that he may have been a recent murder victim. But instead he had been lying in the bog for nearly two and a half millennia! Apparently he was hanged or strangled – a leather string was still round his neck when he was found. What story is behind his execution we can never know for certain, but it has been speculated that he may have been a human sacrifice (maybe to appease some kind of bog god). The contents of his stomach were also well preserved and so it could be determined that he hadn't eaten for at least 12 hours before his violent death but what he had had was special in that it contained rare seeds, and quite a variety too. He was wearing a loin cloth and hat, otherwise the body was naked. He was apparently placed in the bog with some care, his posture also suggesting sleep rather than violence …
What there is to see: The Tollund Man is star exhibit of the Silkeborg Museum. His head is original, while the body is a reconstruction (in 1950 only the head was properly preserved, while the rest of the body dried up after having been out of the bog for years). The facial expression of Tollund Man is surprisingly calm, his eyes and mouth shut – he looks like he's sleeping. His skin is remarkably well preserved, only the bog acid made his hair and beard stubble red and the skin tanned dark brown. He's still wearing the hat he was found with. It's an eerie sight – you half expect him to suddenly open his eyes. In any case, it's the closest you can come face to face (literally!) with the Iron Age.
He's not the only bog body in the museum – there's also a female counterpart, the Elling Woman, who was found 12 years earlier and is believed to be of a similar age as the Tollund Man. Otherwise there are lots of artefacts, reconstructions etc. on the Bronze and Iron Age, and there's also a section on the Vikings and the Medieval times.
Location: The Tollund Man is the prime attraction in a small museum in the town of Silkeborg, which is in the centre of Jutland (= the mainland peninsula of Denmark), about 20 miles (30 km) west of Aarhus, Denmark's second city.
Google maps locator: [56.1687,9.5529]
Access and costs: fairly easy and not too pricey.
Details: The Silkeborg Museum is located just a short walk from the centre of the town of the same name. Address: Hovedgardsvej 7. (phone: +45-86821499; email: This email address is being protected from spambots. You need JavaScript enabled to view it.).
Opening hours: in the summer season, July and August, daily from 10 a.m. to 5 p.m., at other times somewhat more restriced, opening between 11 a.m. and 12 noon, and closing at 4 p.m., closed on Mondays from January to June and September to December, and in February further closing days apply,
Admission: 65 DKK (under 18-year olds free). Wheelchair accessible.
Time required: just to see the Tollund Man doesn't take more than a few moments, but if you've made it all the way here and paid for your entry to the museum, why not spare some time for the rest of the museum too and make it something like 30-40 minutes.
Combinations with other dark destinations: none.
Combinations with other non-dark destinations: see Denmark.