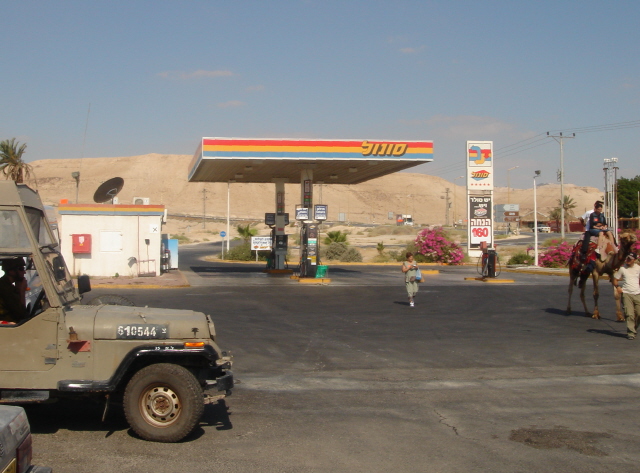 ... Israel … well, what can you say … Its area is probably the most contested strip of land on the planet, and the problems and politics around it couldn't be more complicated or controversial. The cue 'Israel' can trigger the widest range of emotions, from total devotion to utter hatred – depending on who you ask,  e.g. an American Jew or a Palestinian Muslim.

But it's not so much for such current "troubles" that Israel is of interest to the dark tourist (well, only partially). The individual dark destinations are of a different nature. One, Yad Vashem, is the central Holocaust memorial on Jewish land and as such one of the most important ones in the world, even though it's "displaced" from what it commemorates (see the concept of dark tourism). It is located in a city that is laden with history as much as with the current troubles: Jerusalem. Nowhere else on Earth is the "clash" of the three great monotheistic religions and all the politics it entails more palpable …

Of a completely different nature is a site of a man-made environmental disaster: the shrinking Dead Sea. Even this, however, also comes with a site of a historic tragedy (namely Masada) which is very important to Judaism to this day.


Travel to Israel is fairly easy, from a point of view of logistics … at least by air and from European or American points of departure. The airport of Tel Aviv is the single most important entry point for almost all international visitors. However, security is, naturally, extra-tight – so expect more than the usual checks and questions, it can turn into a proper interrogation. Extra time has to be allocated to both check-in as well as arrival procedures in Israel.

Israel is a tiny but highly developed First World country, so getting around is quite easy and no journey takes a lot of time. Roads and public transport networks are excellent, and so is the tourism infrastructure, with countless operators offering tours and excursions … and the Dead Sea and Jerusalem are amongst their most obvious focus points.

Accommodation options are equally plentiful and cover the full range, in particular in Tel Aviv, which for many reasons is the ideal base for exploring the country. It's also the most cosmopolitan and relaxed place for tourists to spend time in when in Israel, whereas Jerusalem poses some tricky restrictions and cultural pitfalls.

Israeli cuisine is heavily influenced by a) its Arab neighbours and b) its Eastern-European Jewish roots. The Lebanese routinely get irritated if things like humous and felafel (chickpea paste and patties, respectively) are declared national Israeli dishes, because they (rightly) claim they're theirs, but nevertheless the quality is similarly superb in both countries. Mezze, platters consisting of a large number of little salads, pastes, finger food portions and what not, are a traditional starter – you often choose direct from large trays that waiters carry around between tables. In fact, you can just as well make do with just these delicacies and forget about mains.

When turning to traditional Jewish cuisine, the word "kosher" is the central watchword. It refers to a complex code of rules of what can go with what (e.g. never meat with dairy products!) and what is forbidden altogether (e.g. pork or seafood other than scaly fish). The strictest are the "glatt kosher" restaurants, others are more relaxed. Central (German) and Eastern European (Poland and Russia in particular) influences show in classics such as "gefilte fish" (fish balls) or borscht, and there is also a distinct influence from the Caucasus, especially Georgia. Israel produces good- quality wines, especially reds, which again usually have to be declared "kosher" (by a rabbi).

Culturally, there is a severe divide between Jerusalem and Tel Aviv. The former is where the strictest, most Orthodox Jews dominate, whereas Tel Aviv is the more hedonistic, relaxed place, where the rules are not followed so strictly, sometimes are even deliberately violated as expressions of liberty, which in turn attracts scorn from Jerusalem. As a British journalist on one of my tours observed: even if Israel should at some point manage to make peace with all its neighbours and enemies, they'd then turn against each other, Jerusalem vs. Tel Aviv. Except on the sabbath, of course – that's the prescribed period of not working, lasting from Friday afternoon to Saturday evening. Even in Tel Aviv I found that the hotel lift was automatically set to stop at every floor … so that nobody has to press any buttons. More disruptively, public transport too is severely limited during the sabbath (for some journeys you may find yourself limited to taxis).

Security is of course a big issue. When I was in Israel in August 2006, this was particularly palpable. It was the time of war with Lebanon, and things weren't going as well as they had used to for Israel (no six-day-war easy victory this time). The north of the country was more or less out of bounds because of the war … and too dangerous due to the regular missile attacks from the Lebanese Hezbollah. In Tel Aviv, I saw soldiers, including many female ones, assembling at the bus station to be driven to the front line, with their machine guns strapped over their shoulders. And along the coast you could see fighter jets and helicopters patrolling. At shopping malls and restaurants, every bag would be carefully inspected (usually by security personnel of Russian descent). But: everybody ostensibly tried to act as normally as possible all the same, despite an undeniable air of tension hanging in the air.

For me it was very educational. Before actually having been to Israel, I too underestimated the Israeli national feeling of being under threat from all sides and how much dealing with this determines the psyche and character of the place. I was only there for a short week – but it was one of the most intense travel experiences of mine ever, as far as the psychological impact of that short time is concerned. I am very glad that I refused to be talked out of this trip at the time.

My wife and I were primarily going to attend a friend's wedding and added a few days of holiday around that date. Because of the war with Lebanon people at home were seriously worried and tried to convince us to reconsider, as virtually all other invited guests from central Europe had already cancelled their trips. But we remained determined. And it paid off ... not just for the gratitude on the part of the inviting wedding party. On our day tours from Tel Aviv we did sense the general tension in the air but never felt at really serious risk personally (see also danger tourism). As an extra benefit, the tours we went on turned out to be much more convivial due to the reduced group sizes as tourist numbers in general were down 80% at the time. We were only around eight people on both excursions (Dead Sea/Masada, and Jerusalem/Yad Vashem) and my wife and I were always the only non-Jews. The others came from Canada, the USA, Great Britain and France. So it was a small, merry, international lot, small enough a group to allow for good personal interaction.

In general, what different people get out of travelling to Israel will to a significant degree be dependent on their religious orientation, of course. For Muslims it's naturally the trickiest to even get in, while Christians can roam quite freely, and for Jews it is the Holy Land attracting the worldwide Diaspora (as an at least once-in-a-lifetime must-do), and especially from the USA, France and Russia. But despite all that onslaught of religion from all sides, I still felt comfortable enough as the atheist that I am. So religion is not a prerequisite for coming to this intriguing little country.

Note that if you have an Israeli stamp in your passport you will be outright refused entry to quite a number of Islamic countries, so if you intend to travel to any of these too, try asking for the stamp to be put on a separate sheet … or apply for a second passport. All diplomats and business travellers who regularly have to go to both sides of the Jewish-Muslim divide have separate passports for this very reason.

Conversely, if you have, say, an Iranian stamp in your passport, entering Israel, or even boarding a flight to Israel, can cause severe hassle, extra questioning, comprehensive luggage checks, etc., even though in theory you should not be refused entry simply for having been as a tourist to Islamic countries. But make sure to allow significant extra time and steel your nerves for lengthy interrogation.