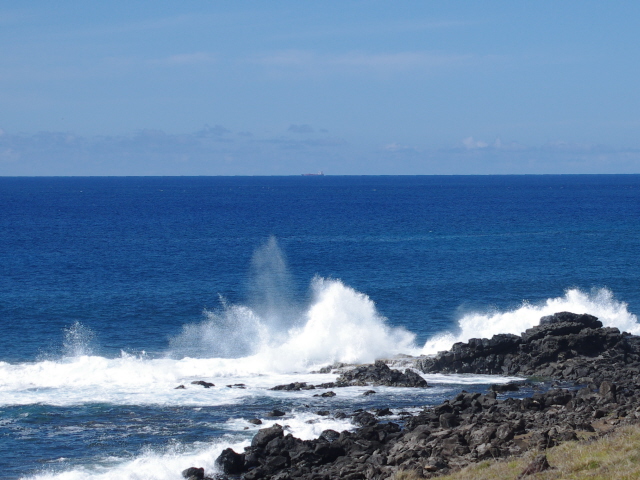 A vast area with countless islands dotted around it – some of which are small states, while others are in the possession of other countries, including in particular Western Powers (esp. France and the USA).

And a few of these are also of interest to the dark tourist – some especially so: Bikini in the Marshall Islands is in fact one of the "darkest" places on earth in that it was used (and made uninhabitable) by the USA for some of its biggest atmospheric nuclear bomb testing, including the most massive hydrogen bomb detonation ever conducted by the West. Still, the place isn't as absolutely inaccessible as you would think – even though it is still a very extreme destination (for divers only!)

Easter Island (which today belongs to Chile) is not only the remotest (inhabited) spot on earth, it also stands for a lost civilization whose collapse bears unsettling parallels with contemporary environmental threats on a global scale.

Nauru is currently becoming a "lost" place – its environment and economy destroyed by exploitation and greed (and lack of foresight).

Hawaii, in contrast, is a thriving and indeed very touristy place today – but also has its dark aspects, esp. for its volcanic sites and for having been the place where WWII started in the Pacific, namely at Pearl Harbor (cf. Japan and USA).

Tinian is the island from where the atomic bombing missions over Hiroshima and Nagasaki were flown from – sites related to this can be visited.

The Marquesas islands in French Polynesia have had a more peaceful history in the 20th century – although there are two famous graves dating from the early years of the century and 1978 respectively: Paul Gauguin's and Jacques Brel's. In the past, the islands were notorious for their warring tribes' rampant cannibalism.

Finally, New Zealand forms the southern end of the Pacific region. It's not a particularly dark place as far as the darker sides of human history are concerned, but some of its violent nature (namely volcanoes, and occasionally also earthquakes) does lend the country a dark element too.
- Bikini

- New Zealand
One the world's currently most environmentally worrying areas is also located in the Pacific, more precisely in the North Pacific Gyre, a huge circular current in which enormous amounts of broken down plastic is accumulating. Called the Trash Vortex or the Great Pacific Garbage Patch, or similar disturbing expressions, it consists of more or less broken down fragments of plastic, mostly a kind of slush with some larger fragments floating in it too, just below the water surface. It's the result of millions of tons of plastic waste that's ended up in the sea. It not just ugly as sin, it is a sin. The toxin laden fragments ultimately kill the marine wildlife that eat this evil stuff. Already, the area, which according to Greenpeace is the size of Texas (and may be even larger), is almost dead. The Plastic gyre in the north Pacific, located between Hawaii and the coast of California, USA, is the world's worst (but not the only one – there are at least four more in other oceanic gyres).

Why am I mentioning this? Being out in the voids of the open ocean, it's surely not a touristic travel destination. And I'm not suggesting it should be. But you can spare a thought or two about it when travelling around – or flying across – the Pacific area. And especially with regard to your own attitude towards plastic products anywhere in the world (see also travel & environmental issues).