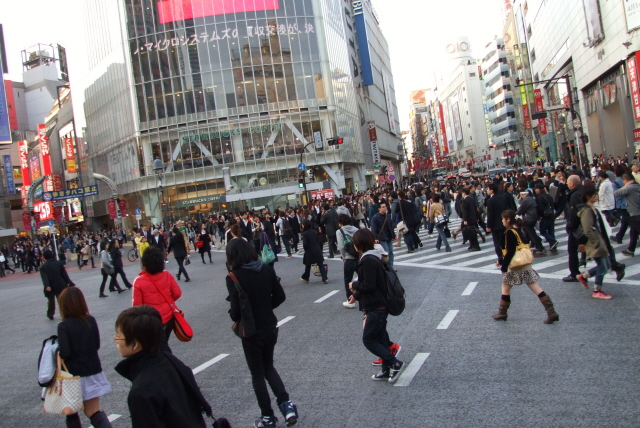 The capital city of Japan and one of the largest conurbations in the world. Tokyo, even more so than New York, stands almost metonymically for the very concept of a modern hyper-metropolis. And the cliché is justified. Those who don't like big cities will find Tokyo taxing. On the other hand, though, Tokyo also offers more quiet corners and hidden-away serenity than the uninitiated may expect. It's also a lot safer than most other megacities in the rest of the world.
For the dark tourist it is not only the most likely entry point into the country, and thus a necessary stopover anyway, it also offers a range of dark sights of its own that are well worth checking out, though not all of these may necessarily appeal to everybody.

What there is to see: Tokyo may not play in the same league as some other big cities in terms of dark tourism, but it does offer a few rather special things. Here are the main ones, which are all given their own separate entries:
- Yasukuni shrine & Yushukan museum – the controversial site of worship and paying respect to Japan's (dead) military "heroes", with a museum that is no less controversial in the skewed way in which it portrays Japan's involvement in WWII in particular.
- Meguro Parasitological Museum – a whole museum dedicated to parasites, not for the squeamish, but one of the world's best-known places of the icky medical tourism category.
- Daigo Fukuryu Maru Exhibition Hall – a small museum built around the fishing boat that in 1954 was irradiated by a US nuclear test at Bikini.
- Center of the Tokyo Raids and War Damage – a private museum about the conventional WWII air raids on Tokyo, the deadliest in history.
- Former Hitachi Aircraft Factory Substation – a very rare (possibly the only) WWII-scarred building still standing, in a western suburb of Tokyo.
- Chofu hangars – a trio of concrete single-aircraft hangars from WWII, also far out in a western suburb.
- Yoshimi caves & WWII tunnels – a site of ancient burial chambers plus underground military production tunnels underneath them, far out in Saitama Prefecture, 30 miles from Tokyo.

During my latest return visit to Japan in April 2019 I also tried to book a place on the guided tours offered at the Safety Promotion Center, run by Japan Airlines at Haneda Airport. However, I failed to get one as it was Golden Week when I was in Tokyo (a major holiday in Japan) and couldn't make any other alternative date offered. It's certainly something to try again next time. The Safety Promotion Center could just as well have been called “Air Crash Museum”, since it's mainly about the crash of JAL flight 123 which crashed in 1985 killing 520 people, the deadliest single-aircraft crash in history (though four people miraculously survived it). The Center has pieces of the wreckage, twisted passenger seats, personal belongings, even farewell notes from passengers (between the technical fault that caused the crash and the aircraft hitting a mountain, the plane tumbled through the air for half an hour). Those with a fear of flying should probably not visit this place. But I'd find it fascinating. By the way, the Center's mission, to heighten awareness (mainly in JAL staff) for safety and accident prevention, seems to have worked. JAL have not had a deadly crash since 1985. To join a tour at the Safety Promotion Center, which is open to the general public too, you have to make a prior reservation, by phone (see their website – external link, opens in a new window). JAL's main competitor ANA is said to have a similar centre for their own staff, but whether that is also open to outsiders, I don't know.

Other than that, there's little of specific interest for the dark tourist in Tokyo, though those more into WWII history (see overlaps, "25 Best WWII sites in the Pacific") may want to take a look at the sites associated with General MacArthur, the US general who was more or less in charge of the country in the wake of Japan's unconditional surrender to the USA following the A-bombings of Hiroshima and Nagasaki.
MacArthur's former residence in Tokyo is behind the current US embassy, now serving as the ambassador's residence, i.e. you can't go inside. The Dai-Ichi insurance company building is where MacArthur had his HQ, i.e. his office. The room, complete with all original furniture, has been preserved as it was back then and used to be open to the public. In recent years (following 9/11), however, it has only been opened on special occasions. But that may change again at some point. The building is located on Hibiya-dori by the moat of the Imperial Palace in central Tokyo.
Right opposite the Dai-Ichi building is the sprawling complex of the Imperial Palace, which was the "official" power centre during Japan's years of military might up to WWII. Still being the residence of the Japanese "emperor" (now only a ceremonial role), the palace is normally inaccessible to the general public, except for two special days in the year. The rest of the year you can only walk around the complex admiring its ramparts and moat and whatever bits of architecture you can spot poking out from within the closed-off quarters. The Imperial Palace is one of Tokyo's main sights and impossible to miss, just head west from the central station and you'll get straight to the main gate (cf. also Yasukuni).
The city (and the whole area) has always been prone to earthquakes, and there have been some major ones over the years. The worst so far happened in 1923. It killed over 100,000 people and flattened large parts of the city … though of course there's nothing indicating this today. Slight tremors are commonplace almost daily. But the great fear is the Big One that is allegedly even overdue, going by historical statistics and seismic research. It could potentially turn out to be one of the biggest natural disasters ever, especially given the size of Tokyo's population today … You would have to be very unlucky indeed to happen to be there as a foreign tourist at that wrong a time, but still, there is a certain unnerving thrill of knowing that it could happen at any moment.
Wandering the side streets you may even come across "evacuation areas", open fields in between the built-up maze of the city, which serve as safe havens where people could take refuge from falling debris should a big earthquake hit. And coming across such a place (though usually it will be quiet and deserted) does indeed bring it home to the visiting tourist how precarious life ultimately is in this place.
By the way: the massive earthquake that hit northern Honshu in March 2011, brought especially horrific destruction through the subsequent tsunami, and also shook Tokyo was not yet the Big One that the city was bracing itself for … worse is still to come …


Location: almost right in the middle of the country, around Tokyo Bay, about halfway along the eastern coastline of Japan's largest main island Honshu.
Google maps locators: