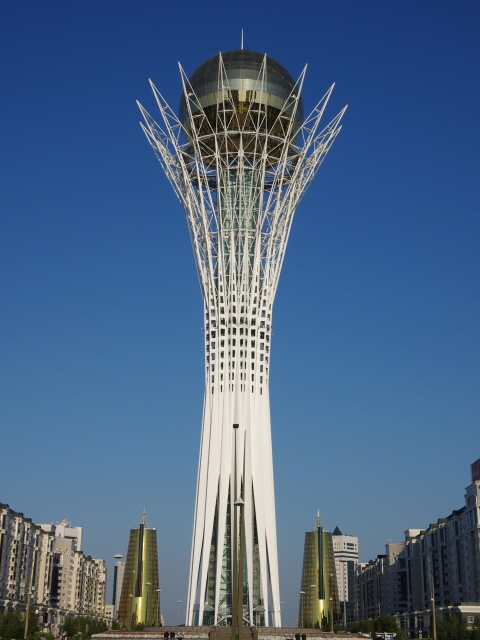 The shiny, glitzy new capital city of independent Kazakhstan. In addition to extravagant modern architecture to keep those with a taste for such things goggling in amazement, those with a penchant for witnessing cults of personality can find relics of that here too.

More background info: known as Akmola or Akmolinsk for most of its earlier history, the Tsarist period and still through the first few decades of Soviet rule, the place used to be a lot more modest than what it is today. It had a certain importance as a trading post and was strategically located on the Ishim river and later on a main train line. And agricultural programmes as well as deportations swelled the population to city size, but even into the mid-1990s it was only a fraction of that of the old capital Almaty.
During the Virgin Lands Campaign (when the USSR launched a massive programme of turning large swaths of Kazakh steppe into farmland), the city was renamed Tselinograd accordingly ('Virgin Lands City').
After Kazakhstan gained its independence in 1992 the old name Akmola was adopted again, but only for a few more years.
In 1997 it was declared the new capital of the nation and the name changed again to the present designation. In Kazakh, "Astana" means simply 'capital city'. All of the government quarter has been built brand new since 1997 and sports some spectacular examples of modern architecture. The name was changed again, to "Nur-Sultan". in honour of the first president of Kazakhstan, Nursultan Nzarbayev, after he resigned in March 2019; but in 2022 this was reversed. So it's Astana again ... and it's still the capital.
Why was Astana made the new capital? Nobody seems to know for sure, but several factors have been suggested, including its central location away from potentially volatile borders, especially in the south and east. Another advantage over Almaty may be that it sits in the open steppe with no limitations on expansion, whereas Almaty is hemmed in by mountain ranges. Astana also doesn't share Almaty's proneness to earthquakes. Furthermore, it provided an open playing field for excessively grand representational new architecture (for which Almaty wouldn't have had the space – at least not without the demolition of older quarters).
The grandeur of Astana's new government district in particular is indeed on a massive scale. It all looks somewhat artificial, of course, but that even adds to the bizarre appeal. The "old town", in contrast, is comparatively humdrum and no match for the still far more cosmopolitan Almaty.
What there is to see: two individual places within Astana are given separate entries here, and both are showcases of the cult of personality devoted to the country's "first" (actually so far only) president, Nursultan Nazarbayev:
- Museum of the First President