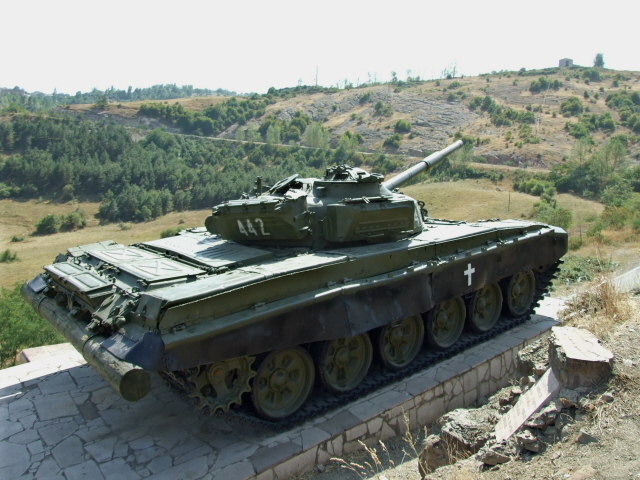 The second largest town in , and one that played a decisive role in the war. Many war ruins still bear witness to this.

What there is to see: as you approach the town on the winding road that leads up from the Stepanakert plain you'll pass a tank on a plinth and a memorial. This, as you might have guessed, is the monument to the capture of Shushi by Armenian forces in May 1992.

Location: a good five miles (9 km) south of Stepanakert, just a mile (1.5 km) off the main Stepanakert-Goris highway, in the heart of Nagorno-Karabakh.

Access and costs: easy and cheap to get to from Stepanakert (cf. Nagorno-Karabakh in general).
UPDATE November 2020: now no longer accessible from Nagorno-Karabakh at all, after Azerbajani troops retook the city in the latest war! Whether it may become accessible from within Azerbaijan remains to be seen.
Details: from the obvious base of Nagorno-Karabakh's capital city Stepanakert you can get one of the frequent and super-cheap marshrutkas (minibus services); but a taxi shouldn't cost too much either, given the short distance. Doing Shushi as an excursion by taxi also makes sense (easier for getting around), unless you want to stay overnight in town and explore on your own, on foot. There are a few accommodation options, even including a surprisingly boutique hotel that bears the name of the city (and also has a restaurant). Lots of construction was going on when I visited (in August 2010) and I spotted at least one spanking new hotel (by the fortress) that looked like it was just about to open. More developments can be expected in the future.

Time required: depends on your mode of transport. If you have a car (with driver, i.e. taxi) then it won't take long to get a good look. Maybe an hour or so. If you're staying in Shushi and want to more exhaustively explore the place on foot, then the steep slopes of Shushi will require more time as well as effort, but an afternoon and/or morning should suffice.

Combinations with non-dark destinations: in general see Nagorno-Karabakh – the premier non-dark sight in Shushi is without any doubt its splendidly gleaming white, restored Ghazanchetsots Cathedral, which dominates the "skyline". Another church stands on an opposite hill, but is much less spectacular close up – though it is a good vantage point for views over Shushi and its cathedral.