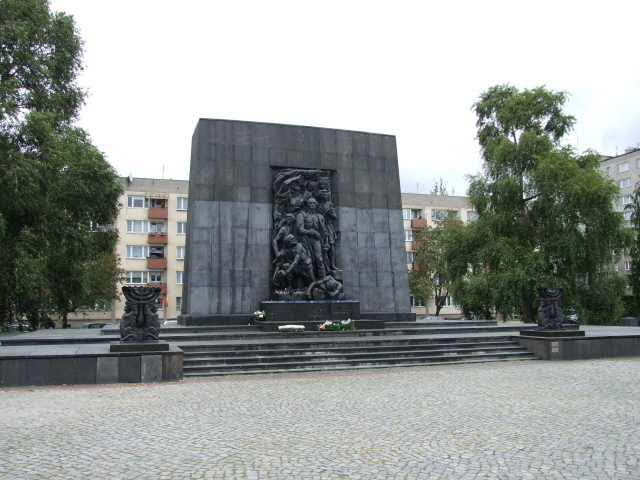 Access and costs: mostly fairly easy to reach; and free.
Details: you could start at the northernmost point at Umschlagplatz on ul. Stawki, reached by a short walk from the tram stops by the Rondo Babka roundabout, where the wide boulevards of Jana Pawla II and Okopowa meet. From Umschlagplatz walk down ul. Karmelicka and take a left turn into ul. Mila. At the next street corner you'll find the 'ZOB bunker' memorials. Turning right and walking one block down ul. Zamenhofa takes you to Plac Bohaterow Getta with the big Ghetto Uprising monument and the new POLIN Museum. Or do it in the opposite direction, starting at the Ghetto Uprising monument. All of the open-air sites are freely accessible at all times.
The ghetto wall fragments are a bit more tricky to track down, as they are sandwiched in between housing estates, namely in the courtyards to the rear of the apartment blocks along ul. Zlota and u. Sienna. They are entered from No. 62 ul. Złota. The gate should be open during daylight hours (6 a.m. to 10 p.m.).
Time required: None of the points along the Ghetto Trail take long to look at, maybe a few minutes each … but allow a bit of extra time for contemplation. The whole trail can be done in a couple of hours – if including the ghetto wall fragments factor in extra walking time to get there (or take a tram down Jana Pawla II). When the new museum opens its core exhibition, this will likely require a significant additional amount of time as well.
Combinations with other dark destinations: in general see Warsaw – of course, the Ghetto Trail is already a combination of sights, but this can be augmented by taking in, for instance, the Pawiak prison museum, which is located just 200 yards from Plac Bohaterow Getta – just walk down ul. Zamenhofa a bit further south and then turn right into ul. Dzielna towards Jana Pawla II.
When starting the walk of the Ghetto Trail from Rondo Babka, consider going up Okopowa for about two thirds of a mile (or a couple of tram stops) where you can find the large Jewish cemetery, or Cmentarz Zydowski.
The ghetto wall fragments are quite near the Palac Kultury i Nauki, worth a visit in itself, and just north of that you can find another site of importance for Warsaw's Jewish heritage: the Nozyk Synagogue off Plac Grzybowski to the west. It's the only synagogue that survived the destruction of the ghetto area in World War II. Next door, the Our Roots agency has its main office – they can organize guided tours of Jewish sites.
Just to the west of Plac Grzybowski you can see some of the very few old(er) buildings that survived the war – they are in a bad state, however, with partly bricked-up or boarded-up windows; but photos hanging off the walls and windows recall the old days of city life in these parts in pre-war Warsaw. It's quite an atmospheric sight to behold. (UPDATE 2021: I think these are no longer there now.)
The Jewish Historical Institute would also make a good addition to tag on to a visit to the Ghetto Trail sites: it's located at No. 3/5 ul. Tlomackie, right by the Ratusz-Arsenal metro station. It hosts various exhibitions and also offers a number of guided tours, of the former ghetto, the Jewish cemetery, the Jewish Praga district or ones following “in the footsteps” of notable persons (including Janusz Korczak – see also Korczak orphanage). You can also attend the screenings of the film “912 Days of the Warsaw Ghetto”. Otherwise the Institute is a treasure trove of Jewish art and is also the home of various historical, scientific projects and offers assistance on genealogy. Opening times: weekdays 8 a.m. to 6 p.m., Sundays from 10 a.m. (exhibitions and screenings always from 10 a.m., last screening at 5:15 p.m.). Admission to the exhibition part and film screenings: 10 PLN, otherwise free. Guided tours have to be specially arranged (and fees apply).
Combinations with non-dark destinations: in general see under Warsaw.
The principal mainstream tourist draw that Warsaw offers is the reconstructed Old Town, which isn't far from the northern parts of the Ghetto Trail, less than a mile (1.5 km) east of Umschlagplatz and the Ghetto Uprising monument.