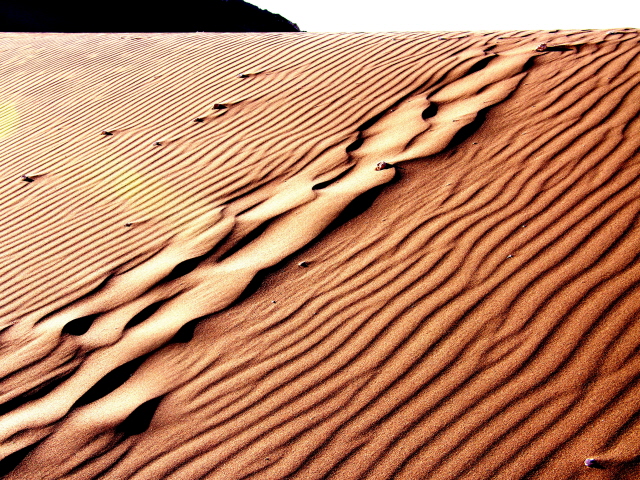 A vast country in North Africa, in fact now the very largest on the African continent (after formerly even larger Sudan split in two in 2011). Most of Algeria's enormous area off the fertile coastal strip is taken up by the near-empty expanse of the Sahara desert – just as is the case in neighbouring Libya.
This desert is for many the prime attraction of this part of the world. For the dark tourist it can be too – as it is such a forbiddingly extreme landscape, arid to the max (with some regions going without a single drop of rain for decades), next to no vegetation and with temperatures dropping to freezing at night, while soaring to 50 degrees centigrade during the day in summer.
There are a couple of more specifically dark places in the Sahara desert too, though. For one thing, it was here that France (the then colonial power) controversially tested its first atomic bombs at Reggane and In Ekker. A naturally blasted crater – by a meteorite – adds to this at Amguid: a clear circular impact crater, several hundred yards across (it is believed to be about 100,000 years old).
France also fought a long and bitter war in Algeria – ending, finally, in Algerian independence in 1962 (though nuclear testing in the desert still continued until 1966). A couple of monuments and museums in the capital Algiers commemorate those days.
- Algiers
- Reggane and In Ekker

Whether it is safe to travel to Algeria has to be evaluated with care at any given time. At the time of research there had been a relatively stable and peaceful period which saw some tourism returning to Algeria after the prolonged violence and uncertainties of the late 1990s  … and tourist abductions in the Sahara in 2003! Algeria did not escape the revolutionary turmoil erupting in the Arab world at the end of 2010, first in neighbouring Tunisia and then in Egypt, both ousting their long-time autocrats in peaceful revolutions rather swiftly. But so far Algeria has been spared a bloody and long drawn-out, full-on civil war as happened in Libya. The recent troubles in Mali in the south that also spread to Algeria were more worrying for the short- to mid-term outlook for Algeria's tourism potential.
In any case, independent travel in Algeria is probably not advisable. A good guide service will be indispensable, especially to get to really remote parts. There are companies offering tailor-made itineraries in the country. I haven't researched the options in more depth yet, but I do hope that one day I will be able to go to this intriguing country …