--- update 2015: indeed, the country has become a failed state, society has basically fallen to pieces, torn apart by violence and hard to see through power struggles. It is full of weapons, extremists and refugees. A highly toxic mixture. Given this situation, the country continues to be pretty much out of bounds for tourism for the foreseeable future. Whether it can even remain included on these pages at all has to be seen ...
--- update May 2013: Libya may be sliding into unpredictable quagmire and fragmentation. The potential as a dark destination theoretically remains, but for the time being travel to that part of the world cannot really be recommended. We have to wait and see how things pan out …
---- update October 2011: Now Gaddafi has been killed (murdered by rebels in cold-blooded revenge, it seems – so that again, as with Bin Laden, not "justice has been done" but it has been prevented), Libya is bound to change even more. In what direction isn't quite clear at the moment. There's plenty of talk of democracy and freedom of speech etc., but also of the "exception" of religion to such freedoms, even of sharia law. We'll see. At the same time there are so many weapons about that the situation appears uncontrollable.

For the time being, therefore, tourist travel to this tumultuous land is to be advised against. What will remain of the Gaddafi era for dark tourists to see in the future is also an open question. My guess is that all-out revisionism will erase all remnants of that era. But maybe some of the vestiges and scars of the months of war of 2011 will be preserved as a kind of memorial? It's hard to tell. ----

---- update spring 2011: Libya has descended into a nasty quasi-civil war, as the revolutionary spirit that started in Tunisia and Egypt also reached Libya … but here the old guard did not so easily yield their grip on power. At present the eventual outcome of the crisis is difficult to forecast. But for the time being no tourism (other than ludicrously foolhardy danger tourism) is possible in the country. ----

Below is what is by now a totally outdated entry which I wrote some time in 2009; when the new situation gets clearer I will update or even completely replace it (possible even take Libya out of the list of dark tourism destinations altogether – only time will tell). For now you can read, like a piece of writing overtaken by recent history, what used to be the reasons why the country was included as a dark destination here: 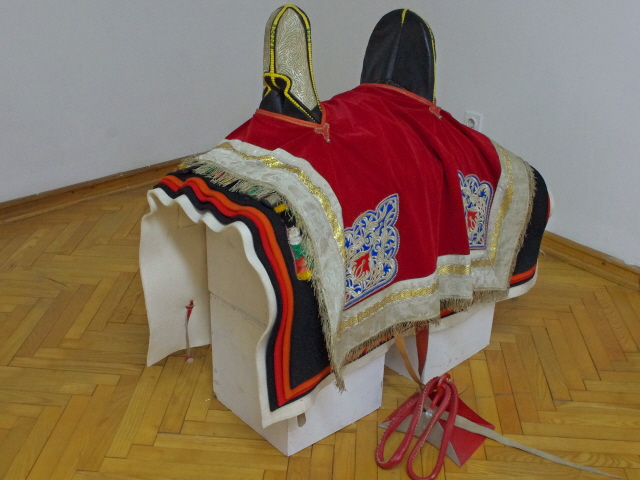 Not a prime dark tourism destination. But while the country may not offer much in the sense of individual dark sites, it has a certain dark aura as such – a former "rogue state", harbourer of terrorists or fosterer of international terrorism, with one of the most infamous "villains" of modern times at the helm: Muammar al Gaddafi (a "villain" from a Western/US point of view – at home he's assumed the position of a god-like hero, of course).
Since 1969 he's been steering Libya along a uniquely North-African quasi-socialist revolutionary path (designated the "Third Theory", as a kind of middle ground between communism and capitalism, but leaning more towards the former). Rich oil resources have helped in keeping the country's defiantly "deviant" course viable.

There's quite an element of cult of personality to be witnessed in the country, which earns it its place on the dark tourism map. And with the country now keen to shake off its former "rogue state" legacy and normalize its relations with the West, it's becoming somewhat easier to visit.

The country's tourism treasures revolve mostly around ancient Roman remains (said to be amongst the best in the world) and the stark beauty of the Sahara Desert (which covers over 90% of Libya's territory).

Also in the desert, however, is one of the strangest features of the country, the so-called "Man-Made River", a gigantic irrigation project meant to make the desert green, but criticized for running the risk of ecological disaster, as the wells of the project tap into fossil water that is not replenished. It's difficult to predict when the reserves will be depleted, but it's definite that the time will come (just like with the country's oil reserves). There are concerns that it is already affecting natural water sources in the Sahara, such as the Ubari Oasis, as the project may be to blame for falling groundwater levels. So perhaps Libya has its own equivalent to China's controversial Three Gorges Dam in the making …

In the capital Tripoli, Gaddafi's former house, which was bombed in the 1986 air strikes by the USA, has been left in ruins – so it can probably count as a kind of dark site too.

As noted at the top of this page, all that's said in the above five paragraphs is now to be regarded outdated.