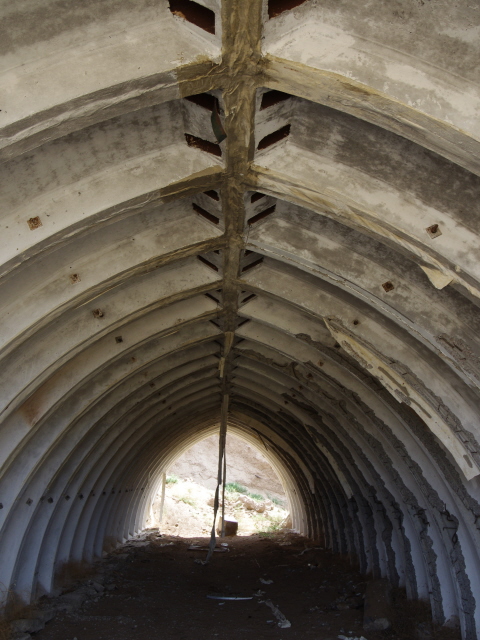 More background info: it's hard to obtain any reliable and detailed information about this place, but from what fragmented sources can be tracked down on the Internet it seems that the base was founded sometime in the early 1950s. It was a special base for some of the Soviet Union's most iconic Cold-War-era long-range bombers, including the legendary M-4 "Bison" and the Tu-95 "Bear" (the latter was also the plane that dropped the largest ever nuclear device, the "Tsar Bomba", at Novaya Zemlya – see Russian Nuclear Weapons Museum). The enormous length of the Chagan aerodrome's runway of ca. two and a half miles (3.5 to 4 km) would certainly corroborate that function.

As such, Chagan clearly formed part of the USSR's nuclear deterrent, whose atomic bomb "ammunition" was primarily tested at the nearby Polygon, the Semipalatinsk Test Site. It may even have been that some of the air-dropped atomic bomb tests were delivered by planes that had taken off from the Chagan base.

For a while Chagan was apparently also one of the few homes for the super-sleek T-160, the variable-geometry supersonic strategic bomber that was developed as the counterpart to the USA's similar B-1 design (see USAF Museum). Unlike the B-1, which has more or less been retired, the T-160 has been called back into service in the Russian air force with some fanfare (by Russia's contemporary "Tsar" Vladimir Putin himself, it was reported). But of course it was no longer operating from Chagan once the USSR had fallen apart.

After Kazakhstan proclaimed its independence in 1991, the base remained in service with the newly formed Kazakh air force for a few years, but eventually closed down altogether at some point in the mid to late 1990s.

The former residents run a website (www.chagan.ru – in Russian only) to keep the memory of their former home alive. But at the site itself, very little remains – other than half-collapsed ruins and ubiquitous signs of looting.

By the way, the name Chagan is sometimes also spelled "Shagan", including by some of the tour operators that offer a stopover at this place in their Polygon/Kurchatov itineraries. The single sign I spotted by the road, which was in Kazakh only, also had it beginning with "Sh"/'ш'. To complicate matters even further, Chagan is/was apparently also known under the completely different name of "Dolon airbase" (e.g. in its Wikipedia entry – which is therefore hard to find … click on the Russian language equivalent, however, and the entry's title is back to Chagan, or 'Чаган' in the Cyrillic original).

Especially when spelled 'Shagan' the place must not be confused with Sary Shagan near Lake Balkhash, also in Kazakhstan but much further south, where the Soviets developed their anti-ballistic-missile programme.

What there is to see: just what you would expect from a really cool ghost town, namely lots of abandoned, semi-derelict buildings. And in this case something extra too.

The place comes in two halves, as it were. First there is the actual former airbase itself, that locals rather refer to in Russian as "aerodrome". Secondly, there is the ghost town proper, namely the settlement that served as the garrison town for the airbase's staff and families. Let's turn to the latter first:

The abandoned town of Chagan is today only a shadow its former "glory" – though that sounds more negative than it should. On the one hand, that glory must always have been pretty limited, given that the primary feature of the town was typical, drab four- or five-storey Soviet-style apartment blocks. Secondly, the fact that that old glory has faded away so much is precisely what makes the place so attractive to a dark tourist with a taste for ghost towns.

As you come to the turn-off to the access road to the former settlement note the memorial stone that has been put up here. It's an almost pyramid-shaped block of granite into which a black marble plaque is set. On this there's the image of a T-95 long-range strategic bomber in flight (i.e. one of the main types of plane that used to be stationed here). The Russian text below translates as: "Part of our hearts remain here forever. People of Chagan of different times and countries. 1954 - 1994"

As you then take the road into town, you pass huge heaps of rubble – parts of the former town that have collapsed altogether (or have been helped along by demolition) and on the left-hand side a transformer station that still appears to be in use.

In the actual town there are mainly two clusters of empty residential blocks. To the eastern half its an ensemble of grey empty shells, to the west one row of blocks is painted in an almost incongruous rosy colour. The peeling plaster on the outside walls almost takes on the shape of maps. And you can still make out the house numbers on the buildings.

You can't really go inside any of the buildings – mainly for safety reasons. They really do look unstable – several staircases have collapsed inside. In one room on an upper floor I spotted newspapers plastered to the wall – and it was, how fittingly, copies of the good old Pravda!

Further to the north-east of the ex-town I discovered what once must have been some sort of memorial. The circular decorative paving suggested this as much as the central stump of a plinth on which some statue or sculpture may once have stood. Now there's just broken tiles and panels with peeling paint …

What may have been a public building, maybe the administrative centre or a Palace of Culture, stands to the west of the rest of the ex-town. It certainly has the faint echo of something grander than Chagan's residential blocks, though now it too is so damaged that you can't inspect it up close (or from the inside). Beyond stands another ruin, inside of which you can make out tiled walls – maybe it was a public swimming pool or something like that back then.

Apart from these partly-standing structures there's just big piles of rubble … and trenches everywhere. The latter are the visible result of extensive looting. Scavengers have ripped out every last bit of cabling or pipes that they could dig up. Hence, it is sometimes difficult to find your way when walking around – and you sure have to watch your step here!

A couple of miles south of the main Semey-Kurchatov road is the actual former airbase of Chagan. Its buildings stand in ruins, and what hasn't collapsed yet is mostly so dilapidated that it should be approached with care.

The double runway is still there and only partly overgrown, so you can even drive on it – we drove the full length of one of them and at the other end our mileage counter read nearly two and a half miles (over 3.5 km).

Alongside the runways and apron you can see what must have been the main "terminal building" brandishing a Soviet red star in the symbol of the Soviet air force on the front facade.

There are lots of small tunnel-like bunkers dotted around, some in a bad state of dereliction, others still fairly intact. These were bomb shelters. Not just in the sense of providing shelter from bombs, but more so shelter for the bombs. In other words: these would have been the storage facilities for bombs, missiles and other ammunition for the airbase's planes (but not for the planes themselves, which were to big and had to be parked out in the open). Interestingly you can see from the semi-collapsed shelters that the mounds of soil covering them were twice the length of the actual shelter. This was to minimize their risk of being hit by aerial bombardment or missiles. Seen from above you couldn't know which half would contain the actual shelter and which half was no more than a heap of earth.

You can walk on top of and into the inside of some of these shelters – but take care: some of them are nowadays used by herds of horses who seek shade in them and aren't particularly keen on being approached by disturbing visitors!

It's a strange and kind-of spine-tingling experience poking around at this derelict ex-airbase – knowing that once this was a place of nuclear threat. Likewise, the abandoned settlement next door is a prime example of a ghost town and it, too, should not be missed by any dark tourist coming this way. A very special place indeed.

Location: in eastern Kazakhstan, ca. 35 miles (60 km) east of Kurchatov, just a couple of miles off the main road to/from Semey. The former airbase's garrison settlement is to the north of this road, the former aerodrome itself to the south.

Access and costs: very remote, best reached as part of an organized tour of the region.
Details: no public transport can get you directly to Chagan – though in theory you could ask about being dropped off the main bus route between Semey and Kurchatov by the point where the access road branches off the main road. But then you'd have the problem of onward travel (you'd have to time your visit well to perhaps catch the next bus – otherwise you'd be stuck out here in the middle of nowhere). You'd struggle to get to explore both the former residential area and the airbase ruins on foot in any case. So you'll really need a car, preferably a 4x4. Rather than attempting it alone, it's much better and more sensible to come here as part of an organized tour, like I did, and maybe have Chagan built into the itinerary when travelling to Kurchatov or Semey . See under Polygon for companies who offer this as a stopover on their tours whose main destination is the Test Site and who can also organize overnight accommodation in Kurchatov (which is otherwise tricky).

Obviously, such tours do not come especially cheap. But that's part and parcel of travelling in (these remote parts of) Kazakhstan anyway.

Time required: depends on how keen you are on exploring such dereliction. I could have stayed longer than the ca. two hours we spent there. Others may find even half that sufficient.

Combinations with other dark destinations: since Chagan is just off the main road between Semey and Kurchatov, those two places are the most obvious combinations, the latter also thematically, as Kurchatov is in large parts a derelict ghost town too, just not as completely deserted as Chagan.

Combinations with non-dark destinations: none anywhere nearby – but see also under Semey and Polygon.