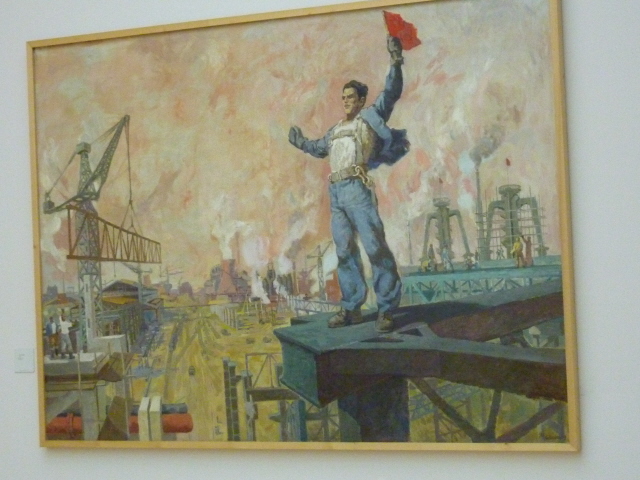 As the name spells it out: it's an art gallery. Now, such institutions don't feature a lot on these pages, but this one had to be included for its fantastic collection of socialist realism paintings – and for some surprising hidden gems in the back yard.

More background info: Tirana's National Art Gallery, or "Galeria Kombëtare e Arteve" in Albanian, used to be a true gem even for those dark tourists not normally particularly fussed about art in general. What made it so good was the fact that it's a brilliant repository of socialist realism art. Many titles speak for themselves, such as "Oil Drill Man", "Partisan Ambush", "Going to Work", "Proclamation of the Republic", or "Working Girls" (and they mean literally! NOT it in the western euphemistic sense as code for 'prostitute'). But my absolute favourite title was: "Everywhere we are at the forefront"! What level of unabashed propaganda lying! Fabulous OTTness.
One artist apparently got a little too real in this game: A painting by Edison Gjergo entitled "The epic of the morning's stars" from 1971 was later criticized as "displaying a pessimistic outlook" on life, blacklisted and subsequently banned from the exhibition. The artist himself was even arrested and put in prison in 1974. It goes to show that if you took realism too literally, it was patently dangerous!
The history of Albania’s National Art Gallery (aka National Museum of Fine Arts) go back to initiatives as early as the 1940s. A first incarnation opened in 1954. The modern building at the current location opened in 1974. Allegedly the place underwent renovation work already in 2009/2010. But maybe that wasn’t done all that well. Why else would it be fenced in and undergoing massive work again now?
Or maybe it’s worse and the whole thing is to become something else altogether? I hope not. In particular I hope that the fine collection of socialist-realist art will go back on public display, whether here or at yet another location. Fingers crossed! I’ll try to find out next time I’m in Tirana.
What there is to see: at the moment not much at all. When I revisited Tirana in April 2022, I found this institution closed and surrounded by a construction site fence. Peeking through this on the one side it looked like they are gutting the building. I have not been able to find any information about what’s going on but hope that this is just a refurbishing effort, not another conversion into something altogether different – like what’s currently happening with the former Hoxha pyramid.
And if it does assume its original function again then I hope that this will include that fantastic collection of socialist realist works of art (see above), as I had found them on my first visit in 2011. I had read, though, that in more recent years, bizarrely, those works were covered up by white canvas so you couldn’t actually see the gallery’s most significant works.
Also back in 2011 there was some communist statuary to be found dumped in the back yard of the National gallery, in particular a pair of staties of Lenin and Stalin. Lenin looked a bit battered, mutilated even, his arms missing. The right one presumably once reached forward (maybe pointing the way, as Lenin statues so often did). As if to avert a similar fate, Stalin was hiding his left hand behind his back and his right hand in his coat (Napoleon-style).
I’ve seen on photos taken in later years that apparently another Stalin statue joined this pair, and that some further statues I found dumped opposite those grand figures were later positioned next them. On my return in April 2022, the backyard was as inaccessible as the rest of the gallery. But I think I spotted an arm of one of the lesser statues parked wrapped up by the entrance to the building site.
And later I spotted the Lenin and Stalin on the front lawn of an off-limits government building at the rear of Lulishte Ismail Qemali park and off Rruga Ismail Qemali. I went up to the guarded gate but was basically shooed away by the very monosyllabic armed guard (“No” was all he said). But I peeked in through the fence and hedge on the side of the compound and managed to sneak a photo from there (see below). I also saw that there was a period car with Lenin and Stalin, but have no idea where that is from and what its significance is. Neither do I have any clue as to whether the Lenin and Stalin statues will one day be returned to the National Gallery, if it continues to function in that role in the future at all, which is also unclear at the moment.
Location: right in the centre of Tirana, off Bulevardi Deshmoret e Kombit, just opposite Rinia Park.
Google maps locator:[41.3255,19.8201]
Access and costs: currently closed!
Details: the central location makes the place as easy to find as can be. Just walk down the central artery that is Bulevardi Deshmoret e Kombit and look out for the squarish modern building set back from the street a bit and now surrounded by a construction site fence, while the gallery is temporarily closed.
The opening times used to be Tuesdays to Saturdays 10 a.m. to 7 p.m., Sundays only to 2 p.m., closed Mondays. Admission was cheap, somethink like the equivalent of 1.50 euros. The statues in the back yard could be viewed for free.
Time required: currently none at all, as the gallery is temporarily closed. Back in 2011 during my first visit to Tirana I spent a good half an hour inside this gallery, plus a few minutes by the statues in the backyard. What the future of this place will be is currently unclear, so one cannot even speculate how much time this site will warrant when whatever conversion is ongoing is finished.
Combinations with other dark destinations: see Tirana.
Combinations with non-dark destinations: see Tirana.