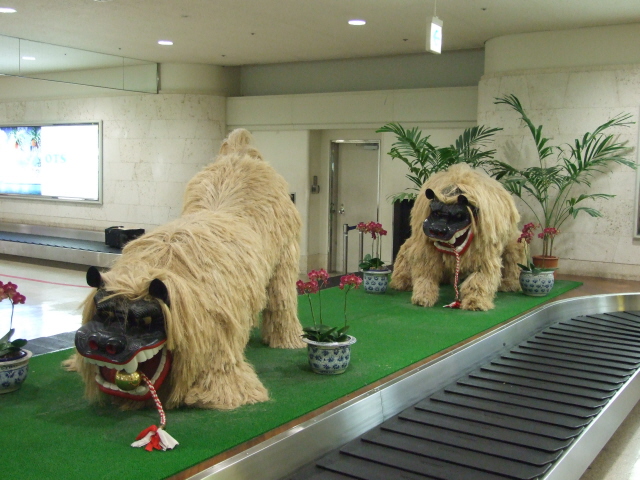 The main island of the Ryukyu archipelago south of Japan's "mainland", and site of the last and bloodiest battle of WWII in the Pacific – it offers a host of battle-related sites that make the trip here worth it for the dark tourist.

More background info: Okinawa once used to be an independent kingdom, also called Ryukyu, like the official term for the whole archipelago. But following the Meiji restoration the islands were fully annexed and incorporated into Japan in the 19th century.
Towards the end of WWII, the invasion of Okinawa became the fiercest battle of the Pacific War. The victorious USA kept the island after the war, only to return it to Japan in 1972, though huge US-airforce bases remain on Okinawa to this day. It is now (again) the southernmost prefecture of Japan.
Today it is touted as a kind of Japanese Hawaii, for its tropical beaches, coral reefs, etc. – but for the dark tourist there's another connection. While Hawaii was the starting point of the Pacific War (Pearl Harbor), Okinawa was the last major battle fought in it, in fact the biggest US landing operation – and the bloodiest period of the whole Pacific War.

Not only did the US suffer the greatest losses ever in any single operation in their military history, with some 13,000 US military casualties (actual figures given vary), and Japanese military casualties several times that, but it was also a massive tragedy for the civilian population. Especially so because civilians died not only as result of direct war operations such as shelling, aerial bombardments, and post-invasion mopping-up operations, but also through mass suicides. The method the people of Okinawa chose with shocking frequency was by jumping off high cliffs … or blowing themselves up with hand grenades. Both nasty.

The Japanese military propaganda had the civilians believe that the Americans were savages who would enslave and rape any ordinary people captured. So they actively encouraged the mass suicides. After all, giving out hand grenades for the purpose is more than just a subtle hint! In total, the Battle of Okinawa, which lasted about three whole months, cost up to a quarter of a million lives.

The Japanese defence of the islands was fierce, including thousands of Kamikaze missions (e.g. from Chiran). It surely demonstrated the spirit to "fight to the last man", even involving civilians in this! So this intensity of defence was perceived by the US as a taste of what it would be like if it came to an invasion of the Japanese mainland. The Battle of Okinawa is thus often adduced as one of the reasons that convinced the US leadership that the dropping of the atomic bombs over Hiroshima and Nagasaki was unavoidable. Only that way, it was reasoned, would Japan could be brought to surrender quickly and unconditionally (which it indeed did soon after the two bombs). And only that way even greater bloodshed that a ground invasion of Japan would have entailed could be avoided. Whether or not one follows that line of reasoning, it is clear that the Battle of Okinawa, which in Japan is known as the "Typhoon of Steel", makes the island one of the darkest places in the eastern hemisphere – even though that contrasts so sharply with the tropical laid-back feel that Okinawa otherwise exudes.

What there is to see: There are countless sites related the Battle of Okinawa, concentrated in particular in the south of the main island of the same name. The most important sites for the dark tourist to visit are these:
- Peace Memorial Park & Okinawa Prefectural Peace Memorial Museum

- former Japanese Navy underground HQ
All of these are part of a south Okinawa (half-)day bus trip offered to tourists from the island's capital Naha (e.g. through japanican.com), but these tours hardly allow sufficient time for a worthwhile visit, certainly not for the Peace Memorial Park and its museum, which alone easily eats up all of the allocated ca. 50 minutes at this stop. Moreover the tour also includes stops at sites of less interest to the dark tourist, including the "Okinawa World" touristy theme park, a lunch stop, Shuri Castle, a brewery and heavy souvenir marketing. So for people who want to visit the dark sites more targetedly and in-depth, independent travel is more recommendable. The bus tour may provide for an easy option taking out the logistics of travel. But it is possible to do it on your own (see the individual entries for details).

Less popular, trickier to find (you may need a local guide), but also worth seeking out are:
- Todoroki cave

- Kenji Monument & cave
In addition to these, there are also several sites that may be more of interest to the military history tourist (see battlefield tourism), including another Battle of Okinawa Museum, which is located on the grounds of a US military base and only accessible by prior arrangement (and civilians need a military escort). There are also several further memorials, burial grounds, sites of particular elements of the battle, etc., etc. – to those interested in all these things too I recommend the relevant chapter in the specialist guidebook "The 25 Best World War II Sites – Pacific Theater" by Chuck Thompson.

Location: roughly in the centre of the Ryukyu/Okinawa archipelago, Okinawa Island lies about halfway between the Japanese mainland, 375 miles (600 km) to the north, and Taiwan, ca.400 miles (650 km) to the south-west.

Access and costs: remote but fairly easily accessible, though comparatively costly.
Details: The airport of Okinawa Island's capital city Naha (population ca. 300,000) is served by various airlines, including domestic flights from Tokyo (two and a half hours, several flights daily from Haneda Airport). There are also flights from other cities, including Nagasaki (one and a half hours). With ANA's "Tabiwari" tariff, bookable 28 days prior to departure, these are farily affordable, ca. 15,000 Yen, one way (at Easter 2009). There are also international flights to Naha from Taiwan and other Asian points of departure, as well as from Honolulu, Hawaii.
Flying is really the only option for getting there. The only theoretical alternative is taking a ferry; there are services from Kagoshima (see Sakurajima) in southern Kyushu but the crossing takes a whole day, costs hardly any less than a domestic flight, and services aren't all that frequent, at least not those that go all the way to Naha.

Getting around on Okinawa itself: public transport outside Naha (where all dark sites are located) is limited to buses, which are slow and not particularly frequent (and thus eat into time). Hire cars are a better option (if you hold an eligible licence – not all countries' driving licences, even if they are "international" ones, are accepted in Japan, check in advance!). The best, easiest and most exclusive way of touring the southern Okinawan sights is to hire a vehicle with an English-speaking driver-guide. It's expensive, up to 50,000 Yen, but it gives you the opportunity to include sights that are not on the usual tourist trail (e.g. Todoroki cave) and the full flexibility of spending as much or as little time at any one point as you wish.

Accommodation options in Naha are plentiful, though often not easy to book individually from outside Japan. A notable exception is the ANA / Crowne Plaza "Harborview" Hotel (which a bit of misnomer, though!); not only can it be booked online it also has some Internet-only-tariffs that are lower than you would think for such a location.

Time required: The sites outlined here can be toured in one whole day, if you have private transport, i.e. either your own hire car or a car with driver-guide. In contrast to that, going by public transport would stretch it a bit, so that you may have to spread it out over two days, or be selective and make do with the main sights that are more easily reachable. If you are prepared to skip the more exotic places and don't mind being rushed, then you may even contemplate going on one of those organized coach (half-)day excursions that take in the three major sites, but also include lots of other things (and don't allow enough time at the Peace Park)

Combinations with other dark destinations: there are loads of more minor war-related sites, but other than those Okinawa itself doesn't offer anything much in the dark tourism department.

Presumably, for most dark tourists a trip to Okinawa would typically be a (somewhat extravagant) extension of a more general (dark) tour of Japan, and can be worked into an itinerary from/to Tokyo and/or Nagasaki. The former is the most likely entry and departure point for most international travellers and also offers a couple of dark sites itself. And Nagasaki, together with Hiroshima, is one of Japan's (and the world's!) premier dark destinations!

Combinations with non-dark destinations: Okinawa is a "tropical island paradise", marketed as something like Japan's equivalent to Hawaii. So there's lots of similar stuff to do, including scuba diving to coral reefs, a massive aquarium, beaches, and nightlife, the latter especially in Naha, of course.
Last but not least, there are also lots of culinary adventures to be had (cf. food & drink). Okinawan cuisine is quite distinct from mainland Japanese! A particular Okinawa speciality can be sampled here too: the so-called sea grapes, a kind of seaweed (although that description doesn't do it justice) with caviar-like little bubbles on strings … does perhaps not sound and look so tempting, but they are incredibly delicious. I bet that if you sample them at the market you will soon be buying some or ordering them at local restaurants (I did, repeatedly).

In Naha, the action is mostly centred along and around Kokusai-Dori (International Street), which is lined with restaurants and tourist shops. Just a bit off Kokusai (branching off to the east about halfway up Kokusai) is Naha's "public market". Especially the fish market part of this is something not to be missed: the colourful tropical fish on display make for an almost psychedelic sight … and you can have the freshest possible sashimi here, right on the spot. Beware, though: some of the titbits that the market ladies may proffer can turn out to be things you'd rather not want to even know about (such as bits of shredded pig's ears!).