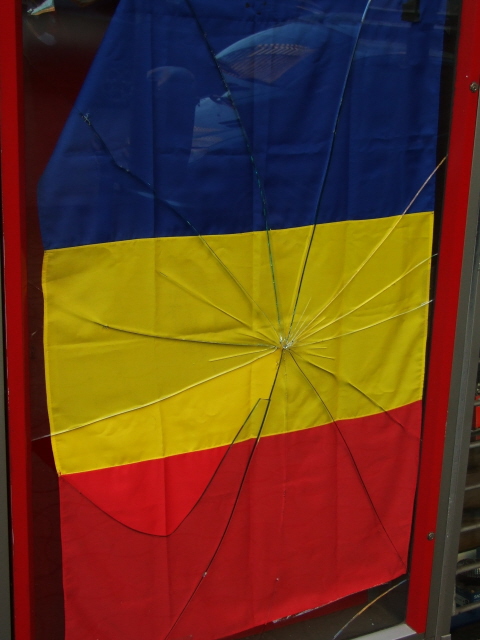 An Eastern European country which has its place on the dark tourism map for basically much the same reasons as other former Eastern Bloc countries, like e.g. its neighbour Hungary, namely: a) the Holocaust during WWII and b) the communist era and its end. In addition the Dracula myth is mostly associated with Romania too and has generated some specialist dark(-ish) tourism in its own right.
Here are the individual places covered on this website:

In Romania, the Holocaust mainly took the form of deportations to newly conquered lands in Transnistria. Some 200,000 Jews and Roma were victims of these rather chaotic measures (at least compared to the systematic and well-organized 'extermination' of Europe's Jewry at the hands of the German Nazis esp. in Poland). Most of Romania's surviving Jews left the country after the war, so that its once 800,000 strong Jewish community has now dwindled to just a few thousand. There's a Museum of Jewish History in Bucharest covering this.

Romania had initially been an ally of Germany and the Axis powers, but switched sides as the Soviet Red Army advanced (and retook Transnistria), subsequently falling under the Soviet sphere of influence, viz. becoming part of the communist Eastern Bloc and a member of the Warsaw Pact during the Cold War.

The first part of the communist era in Romania came with all the brutality of the Stalinist era, with the infamous "Pitesti experiments", a brainwashing and torture programme between 1949 and 1952 (officially a "re-education programme"), its worst excesses. Today only a small memorial pays tribute to the victims at the spot where the prison stood (opposite the military hospital) in the town of Pitesti, 70 miles (114 km) east of Bucharest.

Another political prison of a similar nature, namely Sighet Prison, in the far north of Romania, is today a memorial site and museum. More such memorial sites are likely to be set up in the future.

Better known to the (Western) world is the second half of the communist era in Romania, the reign of the country's own version of a communist cult-of-personality dictator, namely Nicolae Ceausescu. In tandem with his scarily influential wife Elena he subjected his country to some craziness that exceeds much of what happened in other totalitarian states of this sort. To pay off national debts he sold the country's produce abroad while allowing his own people to starve and spent exorbitant sums of money on megalomaniacal projects such as the Palace of Parliament in Bucharest – entire districts of the city were bulldozed to make space for wide boulevards and housing blocks. (Ceausescu allegedly derived his inspiration for this kind of architecture from a visit to North Korea's capital Pyongyang – and some of the results do in fact look quite similar …).

In the West, however, Ceausescu was for a while a kind of a darling in the Eastern Bloc because he refused to stand shoulder to shoulder with the USSR when the Warsaw Pact intervened in the CSSR (ending the Prague Spring), and also deviated from the Soviet line in some other respects. Internally, though, he was much hated, increasingly so during the 1980s when repression (esp. through the dreaded secret police, the Securitate), rationing and those ruthless demolition and rebuilding programmes "estranged" him from his people even more.

The end of communism in Romania was in many ways different to communism's demise in the other former Eastern Bloc countries. As these one by one shed their communist regimes more or less peacefully, the so-called Romanian revolution of 1989, in contrast, was a very bloody affair. It's also the only case in the fall of communism which included the execution of the former dictator, after a brief show trial.

Today, there are several sites related to the revolution for the dark tourist to visit in Bucharest, including the former Communist Party Central Committee building from where Ceausescu delivered his final speech and from whose rooftop he fled by helicopter. His "pauper's grave" is also on the (very determined) dark tourist's itinerary.

Other than Holocaust or communism/revolution-related sites, Romania is of course also home to the Dracula myth – and its tourism industry tries hard to capitalize on this. If your the concept of dark tourism includes Dracula-related sites, then Romania is naturally the place to go, although in this respect it may not be as rewarding as one might think.

Bran Castle, about 120 miles (190 km) from Bucharest, is the place most heavily touted as "Dracula's Castle" (though not so much by the castle museum itself). Historically, though, it's a bit dubious. However, the souvenir industry seems convinced enough and visitors apparently are too.

Purists prefer another castle as the "real" one (because it has a clearer link with the historic figure of Vlad Tepes) – namely Poienari Citadel in the Arges valley, north-east of Bucharest. But that's little more than some pretty unspectacular ruins (some would say just a bit of rubble) at the top of a strenuous 1480 steps up a mountain to the citadel's cliff-top/crow's nest location.

The Dracula myth is capitalized on elsewhere in Romania too, and if you want it to include your food and drink then you have to go to Bucharest's "Count Dracula Club" themed restaurant …