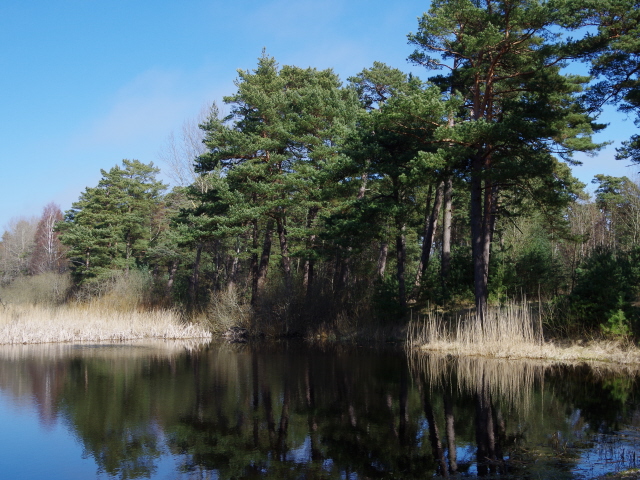 Latvia is one of the three Baltic States (together with Estonia to the north, and Lithuania to the south) that used to be part of the Soviet Union until gaining independence after the latter's collapse in the early 1990s.
The modern history of this small country has plenty of dark chapters, not only relating to communist rule during the Cold War era. Before that, the country was kicked about badly in WWII, first being swallowed up by the USSR (in accordance with the Hitler-Stalin- or Molotov-Ribbentrop-Pact) and then being occupied by Nazi Germany from 1940 until almost the end of the war. During that time, the Holocaust more or less wiped out the Jewish population (and the collaboration of Latvians was an element facilitating this!), esp. through mass executions by the SS Einsatzgruppen.
Several memorials have been set up to commemorate that particular dark chapter in Latvian history, especially in and around Riga.
The city also has an acclaimed modern specialist museum on the more recent past, namely the time of (Nazi and) Soviet occupation and the struggle for independence as well as a plethora of other specialist museums on the same or related topics. Some Soviet relics can be found too, and the city also boasts one of the most remarkable medical museums that I know of. It is in general one of the most rewarding capital cities to visit in northern and eastern Europe, in my opinion.
The main reason that Latvia is prominently associated with dark tourism, however, is for a somewhat controversial venture elsewhere – the Karosta prison in the former naval base town of the same name just north of the coastal south-western Latvian city of Liepaja. The "museum's" speciality are particapatory "show" programmes in which actors subject visitors to simulated "behind bars" (mis-) treatment to provide an "experience" of what it would have been like being an inmate in a KGB prison.
- Riga
(Museum of Occupations, war museum, People's Front Museum, Museum of the Barricades, Tornakalns deportation memorial, Soviet Victory Monument, KGB building, Pokrov cemetery, aviation museum, Paul Stradins Museum of the History of Medicine, Jews in Latvia documentation centre, Riga Ghetto Museum, Janis Lipke memorial museum, Bikernieku, Forest and Brothers cemetery, Kaiserwald memorial, Rumbula)
- Salaspils
- Ligatne Soviet bunker
- Liepaja (Karosta and Karosta prison, Northern Forts, Skede)
- Irbene radio locator and Soviet ghost town
Travel to Latvia is fairly easy, especially by plane, as Riga's airport has many excellent connections to other European cities. Train connections are also quite good, and there are even a couple of ferry connections to Sweden and Germany. Plenty of international and national bus connections complete the range. Buses are indeed the most common mode of transport within the Baltics. Driving all the way to Latvia oneself is a less likely choice for most travellers other than those from neighbouring countries, but it is possible. Alternatively hire a car on the ground for exploring the Baltics independently by road. There are very favourable rates to be found in Latvia!
This is precisely what I did when I travelled to the Baltics in April/May 2014: I flew into Riga and hired a car from the airport from a local company (cheaper and easier than from the big international ones), spent 12 days on the road in Latvia and Lithuania, including visits to places that would have been difficult to reach any other way, such as Irbene) and then returned the car to Riga airport before tagging on a week in the city of Riga and then five days in Tallinn (where I travelled by bus).
Be warned though: driving in Latvia can be a stressful experience. Latvia has the highest accident statistics in the EU – and the main reason is the reckless driving habits of the locals. They just love overtaking at any time, no matter whether visibility allows for it or not. I didn't find it too difficult to adapt to – the main rule is: drive extremely defensively! – because my experiences of driving in eastern Turkey came in useful (and I am naturally a rather defensive driver anyway).
Money matters have been made easier since Latvia joined the eurozone in January 2014, so no complicated conversions into lats (the previous national currency) are necessary any longer. But I did find quite a few prices still simply converted from the old lats, resulting in rather unusual figures (say, 10.76  or such warped numbers).
Prices for accommodation can be quite low by European standards, especially outside the capital, where some amazing bargains can be found (including in Liepaja).
Food & drink can be less affordable, depending on what you're after. Staying with local produce and specialities saves money – and can be interesting. Latvian traditional food does, however, tend towards the stodgy! If you are calorie-conscious, be warned.
Language-wise, Latvia is somewhat less multilingual compared to Estonia (where practically everybody speaks English well), but you can get by more or less. Knowing some Russian may help more in some places than English or German. That's because Latvia still has a sizeable Russian-speaking minority, almost a fifth of the population, left from Soviet days.
Another difference to Estonia is that Latvians are often more open towards their Soviet legacy, which shows in the number and nature of dark attractions linked to this period. So a dark tourist interested in the communist Soviet past of the country needn't be quite so cagey about it here. In some cases, the legacy is openly promoted, especially at the Soviet bunker in Ligatne or at Karosta prison.