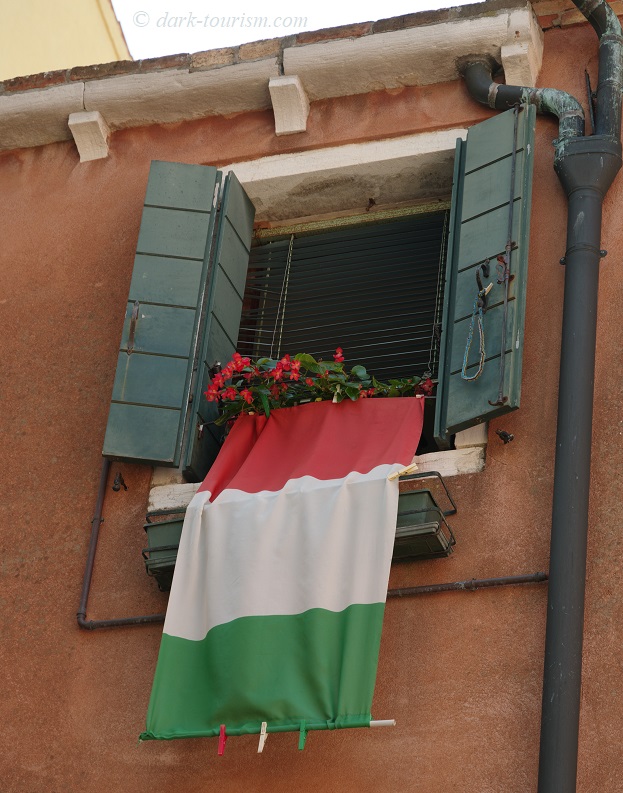 One of the world's foremost tourist destinations as such, for various reasons. Mostly for mainstream tourism and cultural tourism.
But there are plenty of things that are of special interest to the dark tourist too, even though some of these also overlap with mainstream tourism – which is particularly true for Pompeii and the Colosseum in Rome.

Pompeii is primarily an archaeological site of the first order, attracting millions of visitors; but at the same time it's also a dark attraction, due to it having been destroyed by a volcano leaving very visual vestiges of death in the form of the famous "petrified" bodies of victims (plaster casts, actually). So even though it's an ancient site it is also a modern dark tourism destination (see also the concept of dark tourism).
Also dark in the sense of "death on display", as it were, are the fascinating mummies of the Catacombe dei Cappuccini in Palermo, Sicily.
North of Sicily lies one of the world's best spots to view the spectacle of volcanic eruptions, namely on the volcano island of Stromboli – volcanic fireworks are practically guaranteed. Stromboli throws out red-hot material all the time and can be enjoyed in relative safety … or at least that's usually the case – in 2007 activity became more unpredictable and the crater had to be closed off … It has also caused tsunamis when larger volumes of rock have fallen down one of the mountain's flanks directly into the sea.
In the far north of Italy is a less well-known place that was the site of a major flooding disaster of a different nature, back in 1963, when the water in a reservoir held by the Vajont dam was displaced by a landslide, causing homes to be washed away down in the valley beyond and killing ca. 2000. The dam itself, though, is still there to be seen.
A WWII-related dark site worth pointing out to the dark tourist is the abandoned and ruined old village of San Pietro Infine.
Two sites related to the darkest side of WWII, namely the Holocaust, are to be found near Modena, namely the former concentration camp of Fossoli, which is complemented by the Museum of Deportation in nearby Carpi.
The man responsible for so much of Italy's dark history before and during WWII, dictator Benito Mussolini, remarkably can still be visited – in the Mussolini crypt in his home town of Predappio. As you can imagine, this is an extremely controversial site!
Another infamous place name, Seveso, near Milan in north-western Italy, may also ring a bell – the site of one of Europe's worst industrial accidents. However, there's nothing left to see for the dark tourist at the site of the former chemical plant (see places not to be visited). On the other hand, Milan itself has several gems to offer, some of which are also of particular interest to the dark tourist.
A dark site of a completely different nature is the Museo per la Memoria di Ustica in Bologna: the main display here is the reassembled wreckage of a plane (a DC 9) that was apparently shot down by a missile in 1980, killing all 81 people on board.
Finally, in Italy's gloriously ancient capital Rome (also the location of the Vatican), there are plenty of dark sites of very different categories as well.
Italy in general is of course one of the most classic tourist destinations in the world, hence the tourism infrastructure is for the most part highly developed, as is the transport network. Countless guidebooks and websites will provide all the practical information you will need for your general travel arrangements so there's little need to do this here.