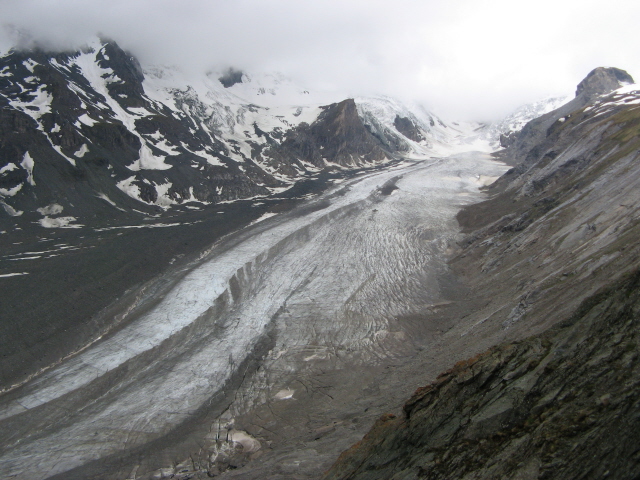 >Photos
More background info: Climate change is one of the most pressing (and equally depressing) as well as the most all-encompassing problems in the world today, one that could quite possibly change the civilized world of humans on this planet for ever. In that way it's probably the potentially "darkest" theme to be entered here of them all.

What there is to see: The glacier itself can simply be viewed from the observation decks of the site, or, and this is the special thing: you can first take the funicular down and then walk right to the edge and even onto the glacier itself. If you do this, the degree of glacial shrinking will become very palpable indeed.
When the funicular was first built in 1963 it was intended to take people right to the edge of the ice, which it did back then. Now, however, you get out at the end of the funicular and the ice is still way off in the distance – down a winding, signposted path. And it's a bit of a hike, esp. the way back up! It's perfectly feasible, though, if you're not totally unfit, and doesn't require anything more than normal sturdy shoes.

So there's actually much less of the glacier to be seen now than when tourism first flourished in this place, but from a "dark tourism" point of view that's the point. It is a clear warning sign that the effects of climate change are already well underway.
UPDATE 2021: in the intervening years since my visit in 2007, the Pasterze glacier has retreated a further mile or so (1.7 km). Where the glacier tongue is visible in the old photos below, there is now a greenish meltwater lake (you can see this well on Google Maps; links under location). To get to the ice now you'd have to hike a lot further: And from what used to be the main glacier viewpoint, it is now hardly visible at all any longer.
From a non-dark point of view, the natural beauty of the whole area is still to be admired, esp. the peak of the Großglockner – and so are the cute marmots that you can see coming up close to the car park …

Location: at the heart of the Austrian Alps, at the end of a side route, aptly named "Gletscherstraße", branching off the scenic mountain pass called "Großglockner Hochalpenstraße" to take you to the Kaiser-Franz-Josefs-Höhe visitor centre with its huge three-storey car park. While the car park may be in stark ugly contrast to the mountain scenery, the views opposite compensate. Across is Austria's highest mountain, the said Großglockner (3798m), and below – the Pasterze glacier.
Google maps locators:
Main car park: [47.0753, 12.7516]
Top of the funicular: [47.0752, 12.7508]
Bottom of the funicular: [47.0741, 12.7489]
Edge of the ice in 2007: [47.0749, 12.7459]
Edge of the ice in 2021: [47.0835, 12.7291]
This is the touristic highlight of the Hohe Tauern National Park, and in high season expect throngs of visitors and a congested road. Just outside peak times, though, the drive on this winding road full of hairpin bends is a real treat in itself – but look out for those motorcyclists who for ages have traditionally flocked here to test their skills and their machines.

Access and costs: restricted (summer only) and not free (toll road); but not too complicated to get to.
Details: The main Hochalpenstraße road, built in the 1930s and connecting the small alpine towns of Fusch in the north and Heiligenblut in the south, is a toll road, which closes at night – and for the entire winter season (at least for normal private cars). So there's access by road only from ca. May to October.

Time required: A visit to just the Franz-Josefs-Höhe and the Pasterze glacier can easily be done in a day from either end, but allow more time if you have to travel from further afield or want to explore the other (non-dark) attractions in these parts too.

Combinations with other dark destinations: None – unless you count other shrinking glaciers in the vicinity, or the mountain rescue elements in the exhibitions in the visitor centre museum …
For places farther afield see under Austria (and also Italy).
Combinations with non-dark destinations: Obviously the whole of the Hohe Tauern National Park is well worth a visit in its own right. Mountaineers, or just alpine hikers, have lots of opportunities here, and so have those interested in alpine flora & fauna (a particular feature being the aforementioned marmots).

The area caters well for visitors, including several restaurants where to find sustenance, and places to stay overnight along the way as well as at both ends of the Hochalpenstraße. Other attractions include an Alpine Nature House, a geological walk, a bird-of-prey centre, an exhibition about the building of the road – and  the road itself is one of the most spectacular drives you can go on in Europe (as long as it's not too badly congested, that is).
And of course there's the rest of Austria; and Italy isn't far either.