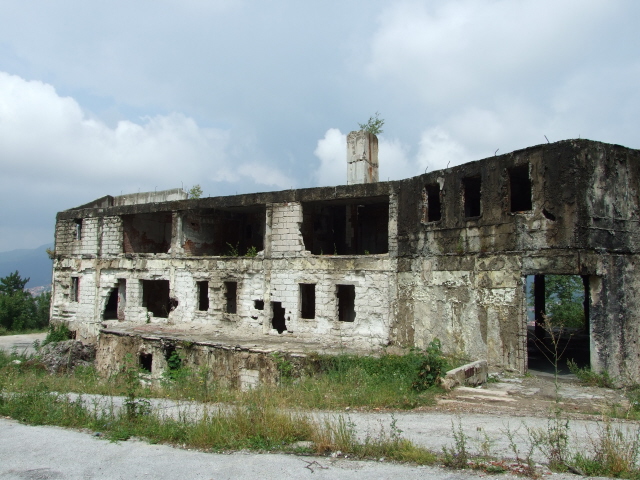 Sarajevo still bears many scars from the siege during the war in Bosnia-Herzegovina. While some of the most iconic damaged buildings (such as the parliament building or the Holiday Inn) have been renovated or are currently undergoing refurbishment, others are still pretty much unchanged since the war. A few are likely to remain so for some time to come, and one or two may even become permanent memorials to the war …
>More background info
>What there is to see
>Location
>Access and costs
>Time required
>Combinations with other dark destinations
>Combinations with non-dark destinations
>Photos
More background info:  see under Sarajevo.

What there is to see: As the title suggests, buildings that were partly (or largely) destroyed during the shelling of Sajarevo in the war between 1992 and 1995. Almost all buildings sustained some degree of damage, but a few stand out and are worth a special mention here (NOTE: things change – I cannot guarantee that any of these ruins are indeed still in the state described and depicted here):
- The Old People's Home building – this is probably the most impressive of all of Sarajevo's war ruins, and the most likely to remain as a memorial. It is located off Bulevar Mese Selimovica, right next door to the Radon Plaza hotel (see Sarajevo > access and costs) and business centre not far from the airport. The building that apparently was to be an old people's home was brand new and not yet occupied when the war broke out. The guide I had when I visited in August 2009 pointed out that the fact that the building was unoccupied partly accounts for it being so drastically pockmarked with bullet holes: apparently, not all Serb soldiers were keen on shooting at Sarajevo's civilian citizens, so some deliberately used up the rounds of ammunition allocated to them for disproportionally targeting this building, which they knew was empty. In any case, it is an eerie sight, the colourfully painted walls (in pink, blue, yellow, green etc.) riddled with bullet holes, and trees growing around and out of the gutted shell … In theory you could even go inside – the fence around the compound has gaps – and the graffiti on higher floors is evidence of people having done so. In general, of course, you are however advised against entering any war ruins, even though I didn't spot any explicit keep-out signs here … The front of the tallest building facing the boulevard is partly used for putting advertising billboards on. When I visited, there was a huge advert for double-glazing windows – which I found a rather ironic sight on a completely windowless gutted ruin …
- The former Yugoslav Army barracks – when the war broke out, strong units with tanks were stationed here, in a large compound just south of the main train and bus stations, but it had to be given up after a complete takeover of the city failed. Instead, the heavy guns were moved to their positions from where Sarajevo was shelled during the siege – and one particular target was the former barracks. Part of the complex has been rebuilt and serves as the campus of Sarajevo's university, but at least one wing to the western edge of the premises still remained a derelict, roofless shell with trees growing inside the walls, cordoned off and with warning signs underscoring that entering them would be dangerous. It's unclear for how much longer these ruins might remain, as building work all around was already encroaching on them when I was there (August 2009).
- Residential high-rises next to the King Fahd Mosque – it's a particularly odd contrast: the spanking new shiny mosque (as the name suggests, a donation from Saudi Arabia), in the Ali Pasha Polje/Mojmilo area of south-western Sarajevo, and right next to it a set of still heavily war scarred apartment buildings. Some bigger holes in the walls have been mended in only a rough and ready way by bare bricks, some have new windows in them, but most of the shell holes in the facade still look like they were made just yesterday. These buildings are not complete ruins, and they are inhabited, but it's precisely this fact that helps give a good impression of how hellish this war zone must have been …
There are more ruins of course, mostly on a smaller scale, but often in much more exotic locations that are normally as good as inaccessible for tourists, such as: the former Serb HQ position on a rock high above the southern hills over Sarajevo, or the ruins of the Olympic bobsleigh run, as well as various former/abandoned mountain lodges, etc. – but to find these you will probably need a good local guide. Alternatively you could just hire a car and use the map locators given below to search out those places for yourself.
UPDATE October 2018: I've just been informed that at least the old bobsleigh run has become much more accessible for independent visits through the rebuilt cable car to the peak of Trebević, from where the bobsleigh run is within walking distance. Also: the Hotel Bristol tower block, which in the photo gallery below is still seen as an empty shell, has meanwhile been refurbished and is run as a hotel again.
Locations: in various places all over Sarajevo, esp. out of the centre:
Google maps locators:
[43.8431,18.3341] – ruins of old people home
[43.8574,18.3933] – former Yugoslav Army barracks
[43.8405,18.3431] – apartment blocks near King Fadh Mosque
[43.8449,18.4222] – former Serb HQ ruins
[43.8395,18.4431] – ruin of Olympic bobsleigh run
Access and costs: varies, from easily walkable to hardly accessible at all, unless on a guided tour, and from free to rather expensive (tour).
Details: The ruins specifically described above are by or near the main east-west boulevard through Novo Sarajevo and are thus fairly easily reachable by the tram lines that go along it – getting to the army barracks ruins would even be walkable as they're just beyond the train station. The more exotically located ruins can really only be accessed through a guided tour. Investing in such a grand dark tour of Sarajevo is also worth it for the sites that would be easier to get to individually, because then you also get some information about the story behind the otherwise silent remains …

Currently several Sarajevo operators offer such tours, of varying lengths and costs, for groups or individuals, from as little as 30 EUR, others are more exclusive private tours – including the one I was on with a rather eccentric veteran in the dark tourism "industry" (ask at the Tourist Info for details); unfortunately this is relatively expensive, but it's quite an experience ...
Many such tours also include the War Tunnel (on some the entrance fee for this has to be paid separately, others include it), some concentrate only on sites within the city limits, others include the mountain locations. It may pay off to do same advance research, compare prices and what's on offer, and then decide what really suits you most.

Time required: depends on the number of sites and mode of visiting. Easily accessible individual sites take as little as only a few moments to take a look at, others require transport or a guided tour, which adds to the time required – at least half a day can easily be spent on a full dark tour of the city's war remnants …
Combinations with other dark destinations: see Sarajevo.