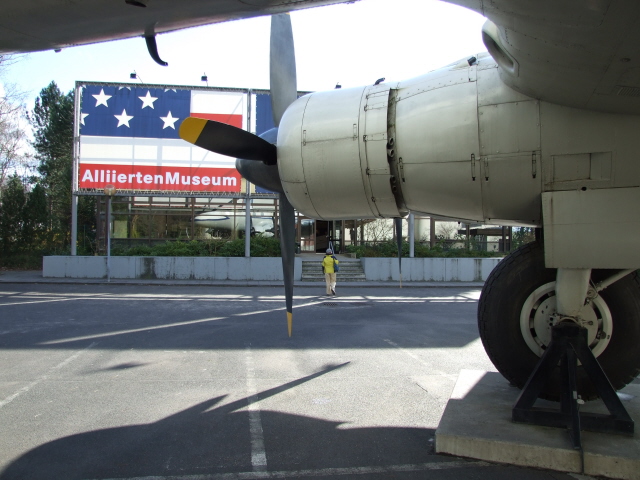 What there is to see: UPDATE 2016: it is planned to relocate this museum to Tempelhof, and the permanent exhibition will undergo a substantial overhaul and modernization. So the text below will at some point become outdated (but probably not before 2018)… and I will have to go back and check out its new incarnation when it has arrived. Watch this space.
The museum is divided into three sections, two housed inside buildings and one open-air exhibition area in between the two. This area also contains the museum's largest exhibit: an original British "Hastings" aircraft as used in the Berlin Airlift (affectionately known in Berlin as "Rosinenbomber", literally 'raisin bombers', or 'candy bombers' as the Americans called them – this goes back to the bags of sweets on little parachutes that some pilots threw out of the aircraft’s windows as extra gifts for Berlin's children).
Other large exhibits include a railway carriage used by the French military, a colourful segment of the Berlin Wall plus a watchtower, both relocated here to form a Wall ensemble, and last but not least the original Western border control hut from Checkpoint Charlie (the one in front of the Museum Haus am Checkpoint Charlie is not real but a reconstructed copy!).

Location: in the south-west of Berlin, in the district of Dahlem, at Clayallee No. 135.
Google maps locator: [52.4556,13.2727]
Access and costs: a bit out, but quite easily reachable; (mostly) free.
Details: It's a bit far out, but still not too difficult to reach by public transport. Just about easy walking distance (ca. 10 mins.) from the metro stop (line U3) "Oskar-Helene-Heim"; or get the (somewhat infrequent) bus 115 from the S-Bahn regional metro train station of Zehlendorf (S1) and get off at the dedicated stop "Alliiertenmuseum".

Time required: You can easily spend an hour here, even more if you really read every text displayed and view all the videos in their entirety. On request, you can be shown a range of films in the conference room, each lasting between 17 and 60 minutes. There are also guided tours on offer (35 EUR), but they are hardly necessary for the normal individual visitor – everything is explained sufficiently by accompanying texts (in English – plus German and French) or is self-explanatory as such.

Combinations with other dark destinations: in general, see Berlin – there's little else to be seen in the immediate environs of the museum, except a couple of memorials, esp. the "Wall Memorial" just south of the museum complex. However, if you've made it this far into the south-west of Berlin you might want to consider also visiting Teufelsberg (the former US spying Field Station) or carrying on even further south and adding on a visit to the House of the Wannsee Conference, which can be reached from the end of the line of the regional metro train line S1, four stops from S-Zehlendorf.

Combinations with non-dark destinations: see Berlin – there are no touristy attractions near the museum, but not far from the museum's grounds you can get to the Berlin's expansive forest and recreational area of Grunewald (cf. platform 17 monument and Teufelsberg).