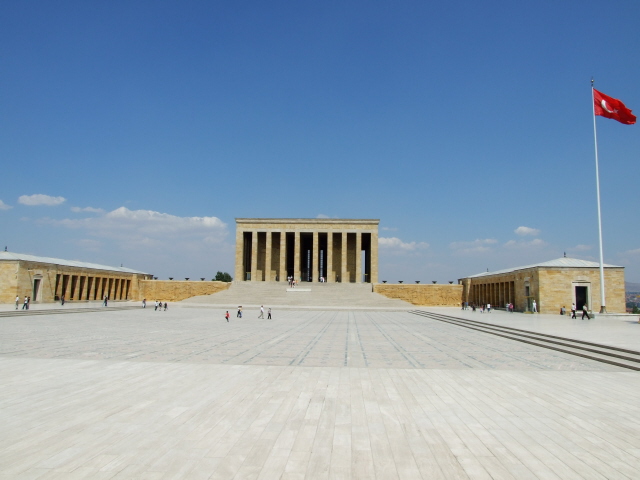 A monumental memorial site in Turkey's capital Ankara, with the Atatürk mausoleum as its core centrepiece. Atatürk, whose original real name was Mustafa Kemal, was the founder of the modern Turkish state. After his untimely death in 1938 it took until the 1950s for this massive mausoleum complex to be completed (and for Atatürk's body to be moved here).
In addition to the actual mausoleum, there's an extensive museum, a huge square ringed by long colonnades, which also include further exhibition rooms (displaying e.g. Atatürk's state carriages and cars), a cinema, large-scale sculptures, etc.

What there is to see: the main part of and dominating the complex is the Atatürk mausoleum at the front of the large square, which is otherwise framed by lower buildings and colonnades.

The heart of it all, the Hall of Honour with Atatürk's sarcophagus is reached via monumental stairs, flanked by huge reliefs whose style is not dissimilar to that of socialist realism, with elements of ancient Greek or Egyptian styles thrown in for good measure. The architectural style of the mausoleum building, the Hall of Honour, is more reminiscent of the general monumental style of the 1930s/40s, beloved as much by Germany's Nazis as it was in the USSR or the USA (e.g. the Pentagon). All this is meant as a purely architectural observation, with no ideological implications at all!

The most informative part of the complex is the Atatürk & War of Independence Museum. Displays include all manner of pictures (some OTT oil paintings included), objects and texts on the topic of Turkey's struggle for independence until 1923 (much of this part is more for a war tourism clientele); more rewarding and in its own way fascinating is the section about Atatürk himself and his achievements. Of these there were many and they receive in-depth coverage.
As you might expect, the museum does so in singing the highest praises for the man. Atatürk is even referred to as "the Great Leader" here – which uncannily reminded me of North Korea's cult of personality surrounding Kim Il Sung, who's also revered under this term as the "eternal" hero of the nation. Well, both undeniably did achieve a lot for their respective countries, though from a point of view of Western democracy Atatürk did so in a much more favourable way (whereas Kim's came with the iron fist of extreme Stalinism). Explanatory texts in the museum generally come in Turkish and (OK) English translations.

The exhibition also leads past the door to the actual tomb where Atatürk is buried, namely directly underneath the huge sarcophagus in the Hall of Honour (i.e. that sarcophagus is only a ceremonial tomb, actually empty, or rather: not even hollow – it's a solid 40 ton block of marble). From the inside of the burial chamber, which is designed in traditionally octagonal Selcuk/Ottoman style, a live camera transmits images onto a TV screen, so you won't miss anything that's happening inside (= not much).

Finally, there's another exhibition hall in which Atatürk's library, various personal effects, as well as gifts from other heads of state are on display. To finish it off in style there's a life-size (but not very lifelike) wax figure of Atatürk sitting, with a stern facial expression, at his original desk – all in a large glass display case.

Behind the museum's exit there's a large souvenir shop in which all manner of things such as badges, flags, pens, even ashtrays with the picture of Atatürk on them are offered for sale.

The Hall of Honour above the museum is indeed of monumental dimensions, though in its rather Germanic simplicity and restrained decoration with some oriental elements in the design it is actually quite stylish. The same can be said about the massive marble (symbolic) sarcophagus at the head of the Hall's interior (Atatürk's real grave lies below the Hall – see below).

By the entrance some of Atatürk’s important speeches are set in stone and in golden letters – and with the help of text plaques offering English translations they are also decodable for visitors without any knowledge of Turkish. Soldiers in full ceremonial dress and white helmets guard the gates. Many visitors, esp. families with children, have themselves photographed with them ... it's somewhat reminiscent of tourist behaviour outside Buckingham Palace in London.

It's worth witnessing the changing of the guards, which involves a lot of goose-stepping, loud stomping about and yelling of ceremonial orders – and small kids mocking the goosesteps! But since the Turks are so child-loving, nobody seems to bear them any grudge for this breach of respectful behaviour …

Within the complex there is also a small cinema in which every half hour a film about Atatürk is shown in an English version. The glorification of his heroic life and achievements gets pretty extreme here, and is politically heavily tilted. You have to wonder what Turkish kids take home from this … It's also an indication why tolerance and openness towards the darker chapters of the country's history (especially with regard to Armenia) are not particularly developed here – if this film is in any way representative of the country's general historical perception.

In some of the remaining buildings of the complex there are further exhibits, such as Atatürk's cars and the carriage which transported his corpse from Istanbul to Ankara before it was laid to rest at Anitkabir. Directly opposite Atatürk's huge mausoleum stands the sarcophagus of Ismet Inönü, the country's second president and formerly close friend of Atatürk's.

Leading off to the side of the main complex is the street of lions, named so after the string of lion sculptures that lines it. At its end there are two groups of oversized human statues, one a male group, the other female (separated by the street – which is quite in line with the general segregation of the sexes in Turkish society). The middle statue in the female group is holding her hand over her eyes in a way that invites misinterpretation (it's supposed to stand for mourning, but looks more like a gesture of embarrassment).

Location: on a hill high over the city, a few miles south-west of the "centre" … well, as much as Ankara has a centre. It doesn't really have an obvious centre like other capital cities, but the old Citadel & old town on another hill is its (tiny) historical kernel, and thus serves as a kind of focal point in this otherwise sprawling modern metropolis in Turkey..

Access and costs: easy to get to (by taxi), and free.
Details: To get to Anitkabir from anywhere within the city it's best to get a taxi (they're so cheap here that it doesn't really make sense to contemplate any other form of transport). Distances in sprawling Ankara are great, too great for walking, and public transport is either difficult to use for foreigners (buses) or not particularly helpful in this case, such as the subway: the closest station is Tandogan on the Ankaray Line, from where it still is a mile-long walk uphill to get to Anitkabir.

To get to Ankara there are all manner of means, from very cheap internal flights (if booked early enough, with Turkish Airlines), fast and comfortable trains from Istanbul (and other trains to/from virtually any part of the country) as well as the ubiquitous overland coaches that the Turks themselves mainly use.

Admission free . Drinking water and snacks sold at the site are exceptionally cheap too – but consumption in the grounds is prohibited, as is smoking. The latter is highly unusual for Turkey, where normally all men puff away everywhere all the time! That it is forbidden here is just another indication of what exceptional status as an almost "holy" symbol of the state Anitkabir enjoys!

Time required: a couple of hours at least should be allocated for Anitkabir. Walking around this huge complex alone will take up some time, and the museum is worth a good in-depth visit too.

Combinations with other dark destinations: see Turkey – Ankara itself doesn't have anything else of interest to the dark tourist, but it could serve as the starting point for explorations much further afield, e.g. by overnight train to Kars in far eastern Anatolia from where excursions to Ani are a main attraction.

A place thematically linked to Anitkabir is Atatürk's flag-covered deathbed in his room in Istanbul's Dolmabahce Palace; it's rather stark and restrained in the otherwise garishly over-opulent palace. In a side room adjoining Atatürk's bedroom you can also see his medicine cabinet – lavishly stocked. This can only be visited as part of a general guided tour of the palace, but it's worth it when in Istanbul anyway.

Combinations with non-dark destinations: see Turkey – Ankara, even though it's the country's political capital is hardly ever recognized as a tourist destination. As such it's far behind Istanbul. That's partly justified of course, as Istanbul offers infinitely more for tourists, but Ankara also has something about it that is worth taking in. It's not so much tourist sights proper, of which there are few: apart from Anitkabir there's the small (and rather unspectacular) old town of the citadel, a couple of Roman ruins, and the award-winning Museum of Anatolian Civilizations (for those who are into such things).

But the city itself has a nice atmosphere – it's the modern heart of the country, where modernity dominates over traditions even more than in Istanbul, at least visibly. Women are often dressed elegantly in Western styles, while head-scarves are seen much more rarely; students sit around in groups on street corners or in parks making music (Western style, with guitars), and shopping opportunities are also plentiful. Moreover, Ankara, with its central location is a good base from where to start exploring other parts of Anatolia, including e.g. Cappadocia just a few hours to the south.