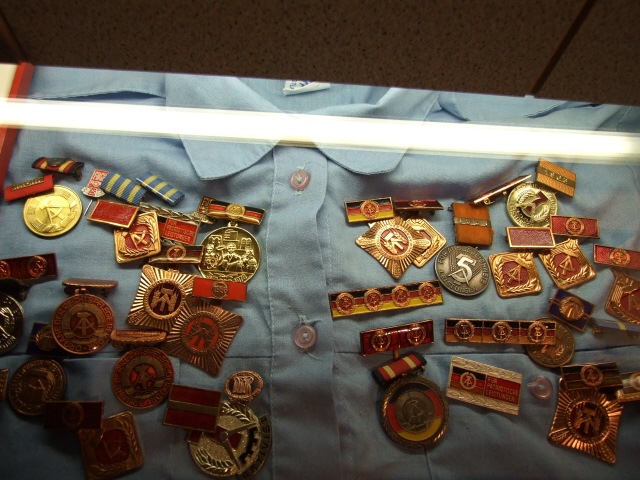 As the name suggests it's a themed museum commemorating the former East German GDR (German Democratic Republic), the capital of which used to be East Berlin. So it's only appropriate that it's bang in the middle of that city.

More background info: It's a fairly new enterprise, but has already won awards, esp. for its being a hands-on, 'interactive' type of museum. Many exhibits can literally be 'handled' (they just ask you to put everything back in its place after you've done so … and don't get any ideas: there's CCTV in operation …)
The museum's approach partly relies on a good dose of 'Ostalgie' (the clipped/blend word for nostalgia for the (former) 'Ost' = East). But it's not all celebratory, nor does it hush up some of the dark sides of the former GDR regime.
All in all, the emphasis is on the illustration of life in the former GDR, less on dry information, which it certainly doesn't overload its visitors with. It may help if you already know a bit about the GDR and its history.
By the way, the museum's clientele naturally includes many people who lived in the real GDR – and their comments can sometimes be worth eavesdropping in on (if you know German that is).
What there is to see: The museum is rather small (everything is in one large room), but rammed full of stuff. There are several themed display boxes, many with drawers underneath that you can take objects out of (e.g. old certificates, books, etc.).
Only some parts of the museum are of specifically 'dark' interest: for instance there's a section about the Stasi (secret police), including some listening devices where you can partly re-enact the Oscar-winning 2006 movie "The Lives of Others".
Also there's a section about the Berlin Wall, one about life in the youth movement and the army – with its typical Socialist indoctrinating elements – and also one about underground resistance movements.
More on the 'fun' side are displays of former GDR everyday products, a real 'Trabbi' (a small GDR car) you can sit in, and a life-size reconstruction of a typical GDR flat in 1970s style, both stuffy and garish. On the TV in the 'living room' you can switch between recordings of GDR programmes and Western news, which many GDR citizens illegally tuned into as well. There's music, toys, and even a model of a nudist beach!
Overall everything's self-explanatory enough, but for those with a keener interest the museum also offers guided tours (60 or 90 minutes) in various languages. They also offer longer guided tours beyond the museum itself to include places in the vicinity that were of importance in the former GDR government quarter.
The museum also has an almost disproportionally large shop where you can buy not only a wide range of books on the GDR and divided Germany, as well as other Berlin-themed books and brochures, but also all kinds of 'ostalgic' objects.
Location: Right in the middle of Berlin's central 'Mitte' district, on the banks of the Spree river opposite the cathedral, just off Karl-Liebknecht-Straße.
Google maps locator:[52.5191,13.4025]
Access and costs: easy to get to; mid price.
Details: With such a location, access could hardly be easier, although stations of the underground and S-Bahn are a short walk away (S Hackescher Markt, U/S Alexanderplatz). But buses 100 and 200 run along Karl-Liebknecht-Str., tramline M4 also has a stop just around the corner.
Admission to the museum isn't the very cheapest given its size, but not too excessive either – at the time of writing 6 EUR for a normal adult ticket. The museum also offers several guided tours, including in English, of varying length and at a range of prices (some more expensive/longer ones include walks in the environs outside) – but currently only for groups (20 people).
The museum's opening hours are exceptionally generous: almost every day, including public holidays, and quite late too – from 10 a.m. to 8 p.m., even to 10 p.m. on Saturdays (the only exception is Christmas Eve, when they close 'early' at 4 p.m.). That way a visit to the GDR museum can conveniently be built into a long day's itinerary as an "easy" and entertaining finale.
Time required: about one hour should normally do, only if you've got a particularly keen interest in these things will you need more time (to browse some of the written exhibits in more detail, listen to all the music on offer via headphones, or play the 'museum game').
Combinations with other dark destinations: lots – see Berlin. Given the central location and late opening hours (see above) a visit to the GDR museum can easily be added as the last item in a long day's itinerary.
Combinations with non-dark destinations: also lots of options – the treasures of Berlin's 'Museum Island' are just a stone's throw away, and as is Alexanderplatz or the central street of Unter den Linden, which leads to the Brandenburg Gate.