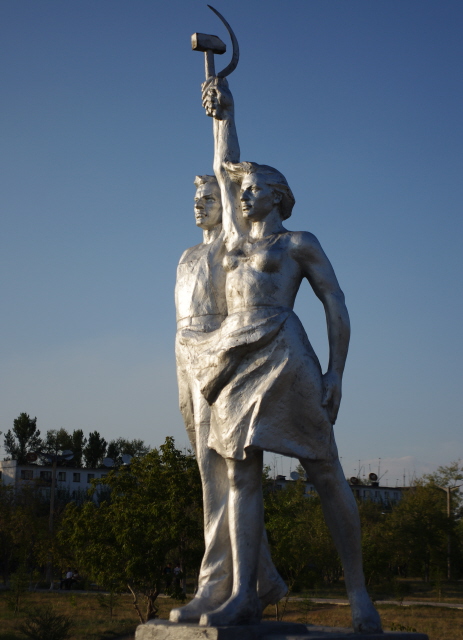 A small industrial town in north-east Kazakhstan, which can make for a day trip from Pavlodar or a short stopover when passing through (en route to Ekibastuz to the west or Kurchatov and Semey to the south-east). The reason why a dark tourist might want to make this detour is mainly for the quite remarkable park of Soviet statuary to be found here.
The collection includes quite a number of Lenins, mostly busts but also a couple of complete ones. Lenin is outshone, though, by a fantastic double statue (very reminiscent of a similar ensemble in Moscow): two athletes, or maybe just two very fit peasants, one holding up a hammer, the other a sickle – look at them from the correct angle, and both are united in the glorious symbol of the Soviet state insignia. At the southern end of the alley of statuary stands a separate war memorial involving the usual red star, two actually: one at its top and another in front of it set in the ground. The latter formerly hosted an eternal flame, which is now, as so often in the East, extinguished. At the time of my visit in August 2011, there were even fresh flowers laid at the base of the monument.
What I found the very best bit, however, was the small, silver-painted, crawler-type tractor on a plinth, which gives this rather mundane vehicle a hilarious status of worship. It's one of the models from the nearby tractor factory of Pavlodar. Indeed a symbol of the Soviet Union – and in particular the Virgin Lands Campaign of the 1960s (see Museum of the President's Cultural Centre in Astana).